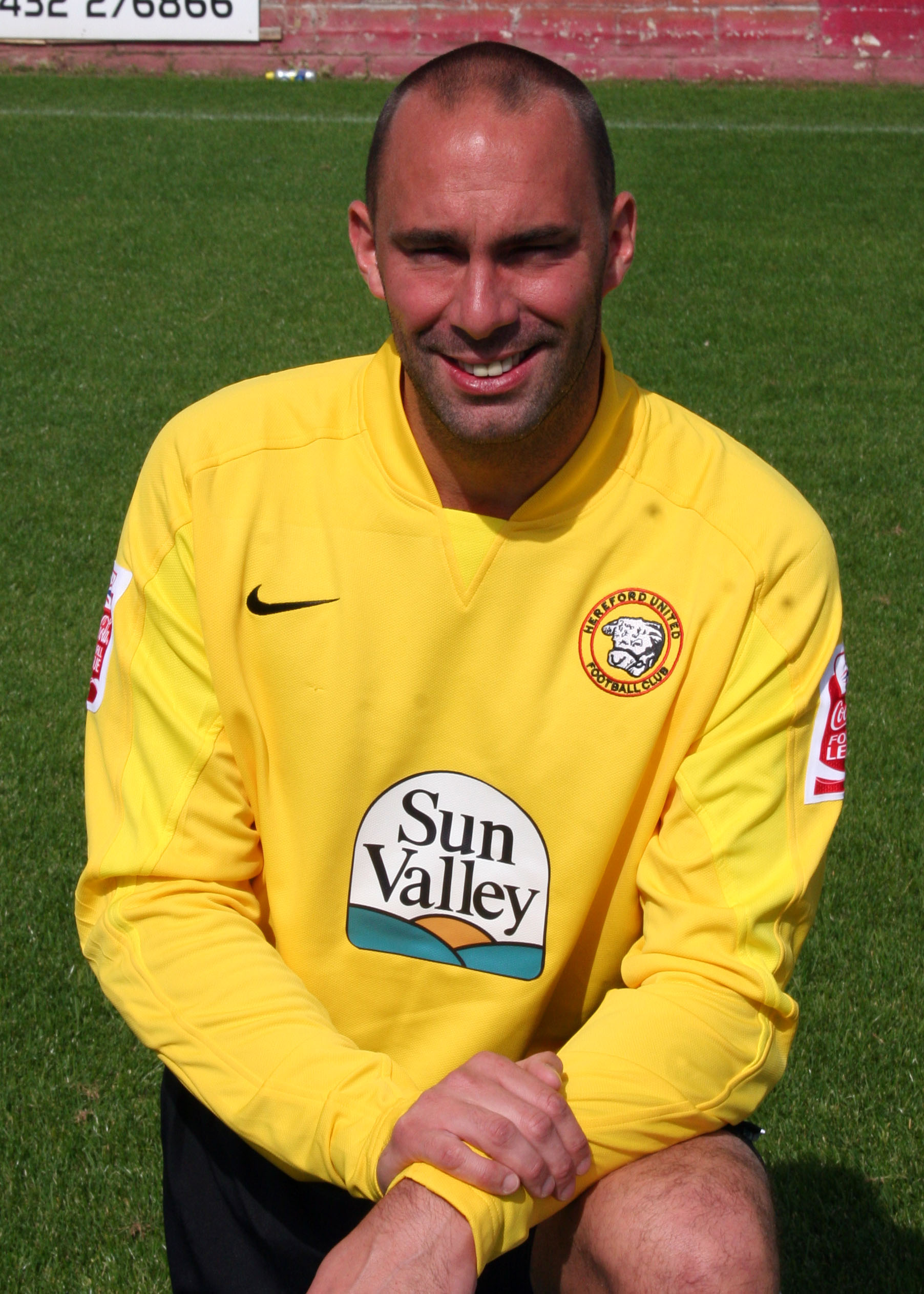 Wayne Brown was born in Southampton on the 14th January 1977. He started his career at Bashley and was signed by Bristol City. He later joined Chester City and arrived at Hereford United in the summer of 2005.

The deal was initially on loan. Brown told me “It’s well known that me and the Chester manager at the time who was Keith Curle didn’t get on. I was on a long term deal at Chester and I spoke to the Chairman and he said he would get me out on loan. He said that Hereford United were interested in me. I always liked playing at Edgar Street and had a lot of respect for the manager Graham Turner and we agreed a season loan”

The previous two seasons Hereford had experienced heartbreak in the Play Offs. Graham Turner made some astute experienced signings, alongside Brown he signed Alex Jeannin, Guy Ipoua, Jon Brady and Stacy Coldicott, he also made the bold decision to have two strong goalkeepers at the club. Reserve shot stopper Ben Scott who spent two years at Edgar Street had been released, so Turner had two very good Conference goalkeepers in Craig Mawson and Wayne Brown competing for the number one shirt.

I asked Brown how he and Mawson got on “Really well, there was no passive aggressiveness between us, we got on great and to this day we still speak”

Mawson started the season as number one, but after the 4th game and a 2-0 defeat at home to Grays, Brown was bought in and kept a clean sheet on his debut in a 1-0 win away at Tamworth on the 29th August 2005.

Brown and Mawson would share the number one spot “Chester had written into the agreement that I couldn’t play in any cup games, so Craig would get the jersey back in the FA Cup, FA Trophy and LDV , but it worked out well in the end for everybody”

Hereford would face Morecambe in the first Play Off Semi Final on the 7th May 2006. The game was played on a Sunday evening live on SKY.

“It was my fault for the Morecambe goal. I made a mess of the corner and they scored, luckily we got a 1-1 draw”

“I told myself I needed to be better for the return game, it was an amazing match, it could have gone either way and was a real up and down tie, they had a period near the end of the 2nd half where they dominated us. I just remember Edgar Street being absolutely packed to the rafters and then Guy Ipoua came up trumps with the winner in Extra Time”

Hereford partied that evening “We had a night out and Graham (Turner) gave us a few days off. I went down to Newquay for a break. Graham knew what he was doing and kept us relaxed, we stayed over in a nice hotel and the preparation was really good”

Hereford faced Halifax Town on the 20th May 2006 for a place in the Football League. In a real battle Hereford were 3-2 up midway through the 2nd period of extra time. Brown was involved in a collision with a Halifax player. Hereford had used all three substitutes and it looked like outfield player Andy Ferrell would have to go in goal and Hereford would be down to ten men.

Brown tells me “I was knocked out cold for a couple of minutes, the physio Wayne Jones got the smelling salts out and I came round, I lost a tooth in the impact as the Halifax player’s knee smashed into my face”

A few minutes later Brown made a brilliant save from Adam Quinn and when Guy Ipoua’s corner flag game management ticked the clock down, Hereford would be 3-2 winners and earnt promotion back to the Football League.

“I was definitely concussed looking back. I don’t remember much after the game and the celebrations after. I had a sore head Sunday morning, but that may have been all the beers I apparently had” Brown joked.

Brown would then leave Chester City and sign a two year contract at Hereford United ahead of the 2006/2007 season. The Bulls would face an away trip to Stockport County on the opening day “We got absolutely battered by them and I had a busy day, but we ended up winning 2-0. I came for a cross and landed on my hip, the ground was so hard. I had to go off and ended up having two months out injured with severe bruising to the bone”

Scott Tynan was bought in on loan whilst Brown recovered and after a spell of rehab Brown returned to the squad in the early autumn.

“It was a strange season that, we had a couple of good wins away at MK Dons and Swindon, but for me we just needed to consolidate, we had that bit of quality when John Eustace came in on loan, he was a fantastic player at Championship level, so in League Two he was sensational”

Brown recalls the end of the season “We had been on a bad run and there was a bit of an incident with some of the lads messing about and Graham Turner wasn’t happy (All documented in Ben Smith’s autobiography) anyhow we went to Torquay on the last game of the season and drew 0-0, after the game Graham Turner apologised to me for how he treated us all and said he was going to have a mass clear out, I assumed he was telling me that I would be off, but he said I was staying and that he would be building the team around a few key players. I came back to pre-season training in the July expecting lots of faces, but there was only about eight of us. I thought we may struggle”

Turner though was on the cusp of building one of the best Hereford United teams for a very long time “He just got his recruitment right, he waited for the right player to come available, he signed the likes of Clint Easton, Lionel Ainsworth and Trevor Benjamin, then supplemented it with season loans of Theo Robinson and Toumani Diagouraga, he then would add more loan players during the season”

Hereford would reach the 4th round of the FA Cup, it would be the losing finalists Cardiff City who would knock them out, along the way they beat Leeds United in the 1st round “We drew 0-0 at Edgar Street and went to Elland Road for the replay and won 1-0, all the lads came together, the squad knitted so well, there was great camaraderie and we played some excellent football”

Hereford were pushing for promotion “Graham used the system to his advantage and bought in loan players, the likes of Sherjill MacDonald and Gary Hooper came in and they gave us a boost when we got knocked out of the FA Cup and lost a couple of league games”

Hereford went to Brentford on the 26th April 2008, if results went their way the Bulls would be promoted to League One “It was the highlight of my career. my dad came to watch the game, but he stood with the Brentford fans as he couldn’t get a ticket in the away end, when we went 3-0 up I could see him celebrating which I thought was a bit brave being stood with them all in the home enclosure, but when the whistle blew he ran on the pitch and we embraced, the Hereford fans were fantastic, we took loads of supporters to the game and the scenes were brilliant”

That game at Griffin Park would be Brown’s last as a Hereford player.

“Graham offered me a new contract but it was only a one year deal, my daughter was living up north and Bury offered me a two year contract. I needed to be closer to her and have some security. I totally understand where Graham was coming from as he was very careful with the finances but I needed to do what was right for my family. I had spent ten years at Chester and didn’t want to go stale. I tell the goalkeepers I train now not to spend too long at a club. It’s very easy to become part of the furniture. I had three brilliant years at Hereford and wanted to go out on a high”

Hereford only lasted a season in League One. They ended up using six goalkeepers that campaign and ended up bottom and relegated. For the record Darren Randolph, Craig Samson, Matt Murray, Chris Weale, Peter Gulacsi and Jose Veiga all appeared in goal.

Brown returned to Edgar Street on the 18th August 2009 as a visiting Bury player. He received one of the best ovation I have seen for an opposition player from Hereford fans. “It worked out so well, I think we won the coin toss and they switched ends so I was off down the Meadow End ahead of kick off. I was really emotional with the reception I got from the Hereford fans. I remember the Bury manager who was Alan Knill telling me at half time “Browny they love you here don’t they” Bury beat Hereford 3-1 that evening.

Brown later had a spell playing in South Africa and then joined Oxford United. He is now the current goalkeeping coach at the Kassam Stadium “It’s great I kick balls at players and apart from playing professionally its the 2nd best job in the world. It’s just a shame what happened to Hereford United. It showed what a great job Graham Turner did, the way the club ended up was a disgrace and it made me angry. I can’t imagine how Graham felt when it was liquidated. I still try and keep in touch and watched the FA Vase final where Rob Purdie scored, it was great having that connection with the old club with him and Ryan Green playing and it was brilliant to catch up with everyone at the testimonial game two years ago”