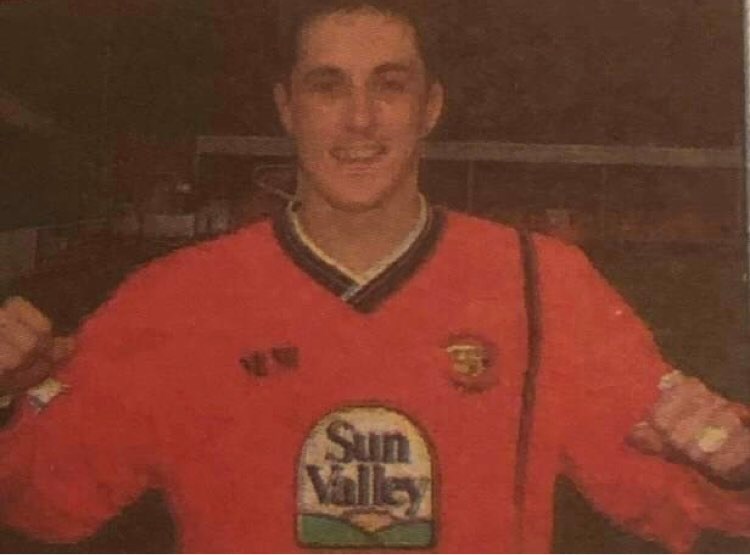 Steve Piearce was born in Sutton Coldfield on the 27th September 1974. He was a YTS Player at Wolverhampton Wanderers and ended up signing a professional contract at Molineux.

Unfortunately he never appeared for the Wolves first team and he was released in the summer of 1996. Piearce spent a season in the Football League at Doncaster Rovers. But with only one goal scored that campaign, he would depart from Belle Vue in 1997 and dropped into the part time game by joining Dr Martens League (Now National North) side Halesowen Town.

After scoring around 60 goals in two seasons for the Yeltz he was one of the hottest properties in non league football. I asked him why he chose Hereford ahead of a host of other clubs that were interested in acquiring his signature that summer.

“I had two fantastic seasons at Halesowen, the phone was red hot, it was manager after manager contacting me, I had so many offers”

Piearce continued “I worked with Graham Turner before when he was manager at Wolves, I had massive respect for him. I saw it as a platform to get back in the Football League with Hereford or with another club. It was also the full time aspect that appealed to me. I saw it as my last chance to have a decent career as I was mid 20’s around then”

Piearce arrived on a highly publicised three year contract. Turner had also signed a couple of other strikers in Leroy May from Kidderminster Harriers, plus Piearce’s former colleague at Halesowen Rob Elmes. Another striker Paul Fewings was also on the books from the season before.

Piearce and May would start the season as the striking partnership, which started with a 1-1 draw at Sutton United on the 14th August 1999.

Piearce scored his first Hereford goal in a 1-1 home draw against Nuneaton on the 17th August 1999.

My first game at home was against Nuneaton. I nearly signed for them, Steve Burr was their manager, we drew 1-1, it was brilliant and a perfect way to start my Hereford career in front of the home fans”

Piearce then scored in the Bank Holiday Monday 2-2 home draw against Telford, but then things turned sour.

“A few weeks later away at Southport. I had a big heavy tackle from behind, I felt my leg twinge, I came off, the next morning I could barely move, that was the downfall”

Piearce was absolutely ravaged by injuries during his three years at Edgar Street. Many supporters were also shocked that the usually prudent Graham Turner had splashed the cash on a three year contract.

“Every player was completely different. For example Chris Lane could walk out on the training ground and never stretch, but he would never pull a muscle, I had a back injury which was a catalyst for a load of things going wrong. My game was based on speed and when my back went, that seemed to set the tone for a load of other injuries”

Piearce briefly returned to the side against Burgess Hill in a FA Cup 4th qualifying round on the 16th October. He came off the substitutes bench to score in a 4-1 win, but then broke down with injury and was out of the side until near the end of the season. A two goal brace on the last game of the campaign against Sutton United gave supporters a taste of what a fit Steve Piearce could do.

Piearce added “Everything was brilliant to start with, what happened with me was the injuries kept going on and on. In season two I pulled both my quads, then my hamstring, I think it was all to do with the back injury sustained at Southport not being properly fixed. We didn’t have a full time physio. Ian Rodgerson did a bit, but it was no good for me. I paid privately to see the Birmingham City physio, the frustration with Graham was that I was on decent money and to his credit he wrapped me in cotton wool, but I just kept getting injured, and then around December 2000 he banished me from the club”

Piearce added “I couldn’t get a run of games going without an injury. Graham (Turner) told me to stay away until further notice. I ended up going on loan to Tamworth and Halesowen. I remember scoring for Hereford away at Morecambe on the Saturday, but my hamstring was hurting me on the coach, the following Monday I told Graham I couldnt play in a LDV Trophy game against Yeovil on the Tuesday. We had an argument and he told me to stay away until further notice”

Piearce would still be paid by the club but wasn’t allowed to train with the first team “I had time away from Hereford and got fit. I returned the end of the season. I remember playing the last game against Boston and scored a late consolation goal”

Piearce tells me “It was a strange one. I felt a lot fitter, but early on in the season Phil Robinson took over. We had a bad start so Graham Turner focused on being Chairman and Phil took over the running of the team. The likes of Scott Voice and Danny Davidson had been signed as strikers and it was hard to get in the first team. In my mind I was written off by then. I came in and trained but didn’t get much of a chance”

Piearce though did make sporadic appearances. He scored the winning goal in a 1-0 win at Dover on the 25th March 2002. “I noticed the keeper was off his line and chipped him from 30 yards out”

Piearce also maintained his record of scoring in every final game of the season during his stay at Hereford by opening the scoring in a 3-1 defeat away at Stevenage on the 27th April 2002.

Unsurprisingly Piearce was released at the end of the season. Graham Turner has his fingers burnt on the three year contract and this would most probably be the reason he was wary of offering contracts longer than one season moving forward

Piearce later played for Hednesford and Chasetown and got a full time job with the police.

“I absolutely love football and I’m gutted that my time at Hereford was a bit of a disaster for everybody . I did some coaching a few years ago for my stepsons team but I’m not involved in the game at present. I still though keep an eye out for Hereford’s results”