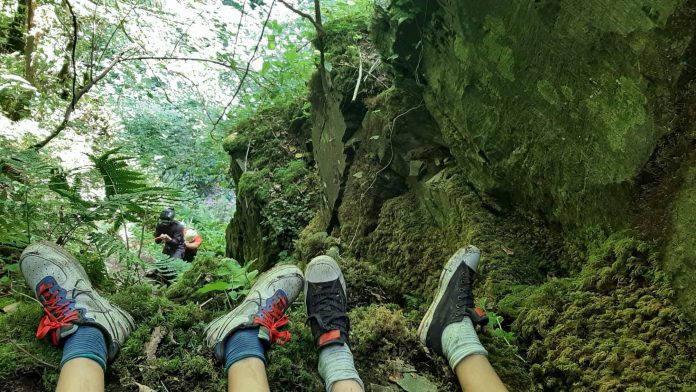 “The team were called to a waterfall in the New Radnor area, to two young boys who had gone exploring up a very steep loose hill next to the waterfall. Once they had reached the top, they soon realised that they couldn’t get back down the loose scree.

“The parents had rightly called for help to assist the boys back down safely. First on scene was a member of Heddlu Dyfed-Powys Police, who had gone up and reassured the boys. He was then followed by a member of the Welsh Ambulance Services NHS Trust (who is also a Brecon MRT team member), who made the boys sit safely on a ledge until help had arrived.

“When the team arrived on scene, Gwasanaeth Tân ac Achub CGC / MAWW Fire and Rescue were already in attendance and had passed on vital information to us as of their whereabouts and the type of terrain we had to work with. We then set up a technical system where a few team members went up to assist the boys back down safely in harnesses and helmets.

“They were very pleased to be back safely down with their parents where they were checked over by the paramedics and found to be fit and well. This just left us to get the team members back down safely.

“The fire service were working on other ways of extraction in the event of changing plan. A successful joint effort effort which could have ended a lot differently if they hadn’t called for help!”