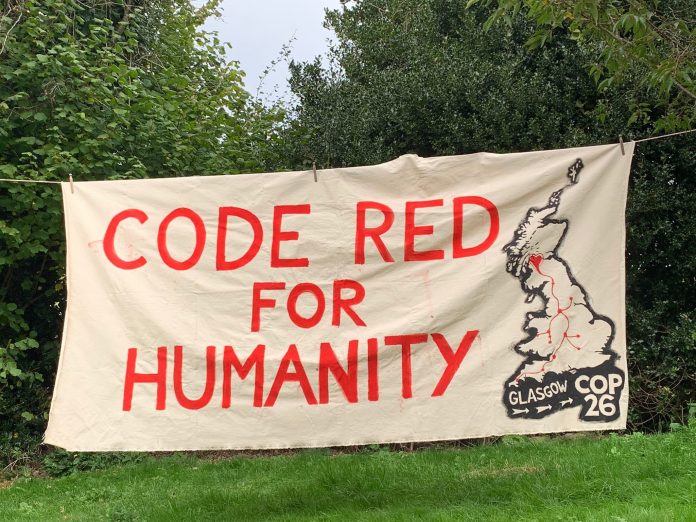 In the run up to COP26, Red Rebel Brigade groups UK-wide will complete a silent, three-day pilgrimage by train, starting in Truro and finishing in Glasgow on day 1 of the conference.

To witness and support the crucial discussions taking place at COP26, Red Rebel groups will stage haunting performances at each station along a planned route. Performances will share the message that we need to act now to halt serious natural disasters, global warming, and life-threatening pollution levels.

The three-day train relay, never before attempted by a performance group, will begin in Truro on Saturday 30th October and end in Glasgow on Monday 1st November. A giant banner (the ‘baton’) will be displayed during a high profile, public demonstration, signifying the end of the journey and the hope that COP26 will drive political climate action.

On Sunday 31st October, Red Rebels from Hereford will process to Hereford station, performing a silent tableau at 11.35. The Red Rebels will be escorted by local guides and environmental activists, including Extinction Rebellion members.

Rebels will depart from Hereford station at 11.47, arriving in Ludlow at 12.13 where Ludlow Red Rebels will silently welcome them in a visually captivating display.

At 13.00 both groups will perform a collective tableau and Ludlow Red Rebels will carry the banner on to Shrewsbury at 13.17, where they will be welcomed by Shrewsbury Red Rebels and other national Red Rebel groups. There will be no disruption to passengers.

“Red Rebels will travel, silently and with purpose, along the veins of the country to the beating heart of COP26 in Glasgow,” explain event organisers Catherine Heinemeyer and Christina O’Neill. “We will bring the message that it’s now CODE RED for humanity, for climate, and for nature. There is not a single moment more to waste, and policymakers who don’t come to the table ready to make sacrifices really will have blood on their hands.”

“The Red Rebel Brigade symbolise the common blood we share with all species, that unifies us and makes us one,” says Red Rebel founder, Doug Francisco.  “As such we move as one, act as one and more importantly feel as one.”