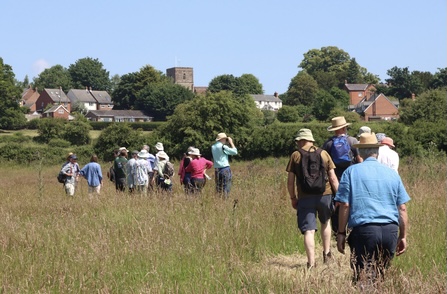 Ail Meadow nature reserve is just over 14 acres and lies within the wonderful, wildlife-rich landscape of the Woolhope Dome. It is home to a number of rare county species including bog pimpernel, southern marsh orchid, flixweed and fen bedstraw.

Herefordshire Wildlife Trust ran a successful fundraising campaign to purchase the meadow with almost £65,000 donated by supporters and £75,000 donated by Severn Waste Services, long-term supporters and funders of the Trust, as well as several other smaller grants contributing to the purchase. Contributions were also made in memory of David Hailes who loved to walk in the area and who sadly passed away in 2021. A bench in his memory has been installed at the reserve.

This month the reserve was officially opened to the public with a celebratory event on 22nd June when donors, staff and volunteers met together at the site.

Ail Meadow will be now managed as a traditional hay meadow, with seasonal grazing, to further enhance the diversity of grasses and wildflowers and attract a wealth of wildlife. The meadow is perfectly placed to provide a wonderful habitat for wildlife: close to a number of other nature reserves and sympathetically managed meadows, woodlands and orchards. This helps to create a network for nature in the Woolhope Dome where species can move through the landscape easily to find food, shelter and mates.

Visitors can access the reserve by walking from the village of Woolhope, following a public footpath. Dogs are prohibited from the majority of the site due to the sensitivity of the wildlife but are permitted on the public rights of way that run through the reserve. Herefordshire Wildlife Trust volunteer and local walking champion Nic Howes has created a new circular walk which takes in all five of the Trust’s nature reserves in the area which is free to download from their website.

“It’s fantastic to now have five wonderful nature reserves within the Woolhope Dome landscape, each with their own character and highlights. Ail Meadow is particularly special as this type of wet grassland, and its associated wildlife, is becoming increasingly rare as land is drained for agriculture or development.”

“It gives us great pleasure to be able to support Herefordshire Wildlife Trust, once again, in their endeavours to ensure that the County continues to be the truly special place that it is.

“Herefordshire Wildlife Trust is a small Trust that works hard to have a big impact and Severn Waste are pleased to be able to stand with it in some small way to help it achieve its goals.”