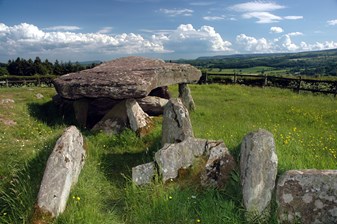 At the beginning of the second millennium AD, in the days of King Ethelred (the Unready,978-1016), Hereford had become one of the principal centres ofSaxon England. Evidence suggests that there could well have been a market in Hereford as early as958.

The county itself, however, was not referred to as Herefordshire until the reign of Canute (1016-1035). In these early days, the area in the south-west of the county was called Archenfield; it was predominantly Welsh in its customs, laws and place-names. The River Wye was considered the boundary even after King Aethelstan exacted tribute from the Welsh kings at Hereford.

In the Domesday Book Hereford was listed as one of just sixteen shire towns ranking as cities. The market has always been an important source of income, another being the pilgrim industry associated with the Cathedral and the shrines of Saint Ethelbert and Saint Thomas Cantilupe.

During the early part of the 11th century the Godwin family were dominant in the county. In fact Harold Godwinsson (the King of England who was defeated and killed at the Battle of Hastings in 1066) had been Earl of Hereford and had held several manors and large tracts of land in the county. His land and that of other Saxon landowners was shared among several Norman knights as reward for their support of the new king William.

After the Conquest, in 1069, William the Conqueror gave his friend William fitz Osbern the title of Earl of Hereford and put him in charge of much of the border territory between Chepstow and Ludlow. Many motte and bailey castles were built here, in fact there are 122 such sites known in Herefordshire, more than in any other English county. This buffer zone between England and Wales, often called the Marches, was ruled by several powerful families, called the Marcher Lords: these were the Mortimers, the Bohuns, the Clares and the Marshalls.

The king had granted these lords all the land they could conquer, so it was in their interest to keep the border warfare going. The Marches continued to be fought over until well into the 15th century, when the ascent of the Tudor dynasty put a stop to the ongoing rivalries of the Welsh and English.

During the 12th century civil war between Stephen and Matilda, Hereford was besieged and changed hands several times.

In 1349, and again in 1362, the Black Death reached Herefordshire and wiped out a large proportion of the population.

In 1461, during the Wars of the Roses, Henry VIII’s ancestor Owen Tudor was brought to Hereford after his capture at the Battle of Mortimer’s Cross (near Leominster) and executed. His head was exhibited on the top step of the High Cross at the west end of High Town and lit by 100 candles. The execution place is marked by a plaque in the pavement in front of Marks and Spencer’s store.

Some historians believe that with Hereford’s loss of its frontier role, it also lost status and some of its economic significance. When Hereford’s religious authorities declined to support Henry VIII’s Reformation, he had the fulling and corn mills on the Wye destroyed, which led to further economic problems, as both the wool and corn trades were severely affected.

You can read more information like this by visiting – https://htt.herefordshire.gov.uk/herefordshires-past/the-medieval-period/medieval-herefordshire-overview/

27/02/2021
Public Health England have confirmed that 17 new cases of COVID-19 have been confirmed in Herefordshire, taking the total number of cases...

NEWS | This is how Herefordshire’s COVID-19 infection rate compares with...