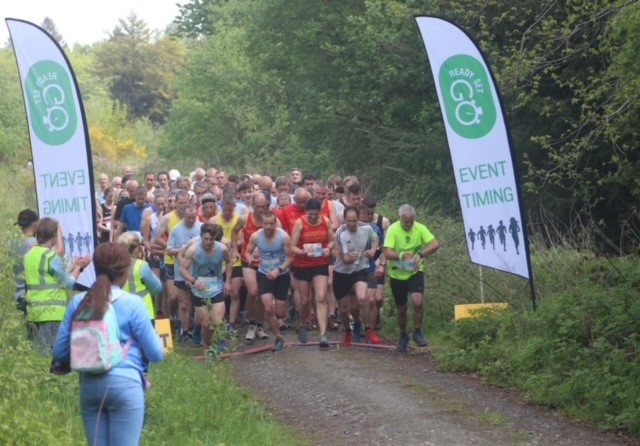 Sunday 15th May saw the return of Croft Ambrey Running Club’s annual race around Shobdon Wood in North Herefordshire. Over 130 runners turned up on what was a damp, soggy morning for the first time since pre-covid times.

The trail race, which had a new route for 2022, follows the main track as it winds its way through the woods and incorporates a number hills that challenges even the best.

Croft Ambrey’s own Matt Yapp finished first in 42:08 with nearly a one minute lead over second place man Wyndham Turner. First female to cross the line was Hannah Fletcher, also of Croft Ambrey Running Club, who ran the course in 52:46.

In fact, it was a brilliant race for Croft Ambrey Running Club who took away both the men’s team and female’s team trophies as well as numerous age category awards.

Croft Ambrey Running Club, would like to thank everyone who came out despite the weather to take part in our race. They hope you had a fantastic morning! And to the marshals and lovely refreshment ladies, without you there would be no race. Thank you so much for giving up your own time to help. Croft Ambrey really appreciate it and look forward to putting on more events soon.