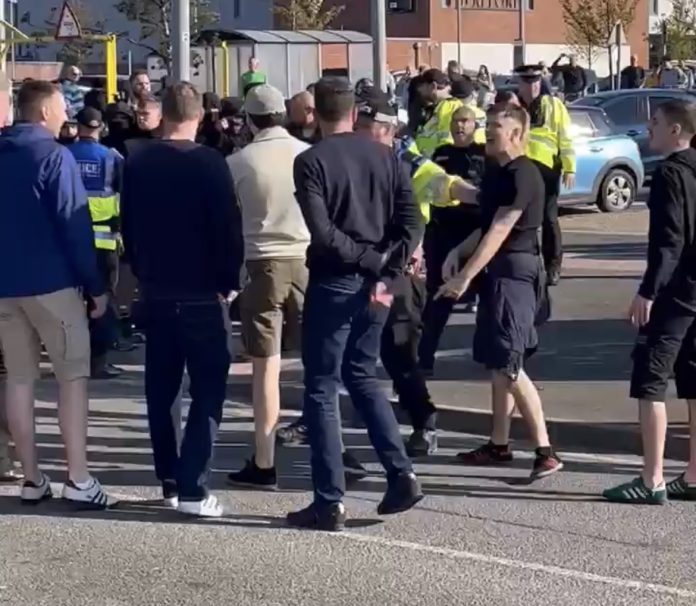 West Mercia Police have confirmed that two people were arrested after disorder broke out after the Hereford FC match on Good Friday.

Hereford FC beat AFC Telford United 1-0 at Edgar Street, thanks to a goal from Tom Owen-Evans, but trouble broke out before and after the match, with Edgar Street, Widemarsh Street, Blackfriars Street and the entrance to the Old Market all temporarily closed due to the disorder.

Videos soon emerged online of the violence, with supporters of both clubs seen squaring up to one another. Bottles were also thrown and one emergency worker was assaulted.

A spokesperson for West Mercia Police told Your Herefordshire:

“Two people were arrested in connection with disorder at the football (Hereford FC vs. AFC Telford United).

“One was for violent disorder and the other for assaulting an emergency worker.”

Hereford FC chairman Jon Hale praised the majority of supporters for their behaviour and for creating a great atmosphere inside the ground, but also warned those behind the disorder that they would face lengthy banning orders.

I want to thank our supporters for turning out in great numbers on Good Friday at a sun-drenched Edgar Street to give their vociferous backing as the players deservedly got the win over Telford.

The Meadow End was in fine voice, and the support around the ground was as loud as it has been for some time; there is no doubt it gave the players – and management – a great lift.

It was fantastic to see the junior teams out on the pitch flag-bearing and taking penalties – I could tell as they burst into the pre-match meeting room how excited they all were, and how impressed they were seeing the lush playing surface through the window.

A big thank you to Jane Griffiths and her Junior Bulls team and to Ben Bowen and your pitch team! The first glimpse of the playing surface makes everyone smile, and sets off the matchday experience for all.

Whether we make the play-offs or not, to see such enthusiasm for the club can only serve us well as we go on into next season and I hope the matchday experience was enjoyable for you all.

More importantly, I hope you feel connected to the club and a part of our journey going forward because with your continued support Hereford FC can be sustainable and ambitious.

A sincere word of thanks too, to our staff and volunteers who worked tirelessly yesterday to ensure everything went off well. In the face of some absentees through Covid, we are indebted to our loyal band of helpers who take such pride in all they do for the club. Thank you.

We’d love to expand that team too, if you have time and an affection for the club, your volunteering will be hugely appreciated.

Please stick with us, and feel part of our journey. This is a family orientated, community focused football club, and we can be stronger together just as we were yesterday. See you at Gloucester on Monday and Happy Easter to you all.

On a day that saw us welcome two junior football sides and see a great turnout of families for the game, it was disappointing to hear of trouble after the game.

Whilst early reports suggest that there was minimal involvement from Hereford fans, it is worth repeating that we will not tolerate any antisocial behaviour and certainly no violence here at Edgar Street.

Anyone found to be involved in football violence will receive lengthy bans.

I hope that the negative actions of a few will not spoil the experience for the large majority of well behaved fans, and I look forward to welcoming you all back to Edgar Street next weekend ad we continue our push for the playoffs.