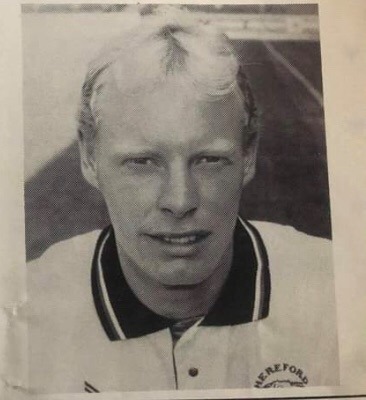 Matt Healey continues the series with a member of the 1990 Welsh Cup winning team.

Shane Jones was born in Tredegar on the 8th November 1972. He would join Hereford United initially as a YTS player.

Shane told me how he signed for the club “I was playing in a youth cup final on a Sunday afternoon. A Hereford scout spotted me and invited me in for a trial and it led from there”

Hereford manager Ian Bowyer would give a number of the YTS players a taste of first team action including Marc Priday, Paul Burton and his son Gary. The club played 65 league and cup matches that season and Bowyer utilized his squad the best he could.

Jones would get his opportunity at the age of 17, making his league debut for the Bulls in a 1-0 win away at Doncaster Rovers on 25th February 1990.

“I travelled up there with the squad and was told on the day that I would be making my debut, we won 1-0 Paul Wheeler and scored, there was huge hailstorm before the game so the referee delayed kick off for a bit which didn’t help my nerves at the time”

I asked Jones what the difference from youth football to the 4th division of English Football was like. “I was naturally fit and knew I was capable of playing, but it was a lot quicker than what I was used”

Jones would make 15 league appearances during the 1989/1990 season I asked him how Ian Bowyer was as a manager “Ian was very positive and gave me confidence as a player, he was really good for me”

Hereford United had reached the Welsh Cup Final. The Bulls would face Wrexham at the Cardiff Arms Park on the 13th May 1990. I asked Jones what he remembered from the build up to the game.

“The day before we trained at Edgar Street in the morning and travelled down to Cardiff that afternoon, we had a walk to the ground and Ian Bowyer told me that I would be playing the next day, I didn’t sleep that much that evening, I was a bag of nerves in the morning. I played in midfield, and was marking Alan Kennedy (ex Liverpool) . Bowyer told me to keep him on his right foot. We won 2-1. It was a brilliant occasion. I still have the number 7 shirt I wore in the game safe in my house”

Due to Jones being under 18 he wasn’t able to enjoy the celebrations.

The party that evening was legendary, the late Brian Watkins who was a fanatical Hereford fan told me a few years back that John Powell (Steward of the Supporters Club) got hold of the Welsh Cup, poured a substantial tipple into it and in the celebrations that Sunday Night supporters were drinking from the trophy.

Jones commented “I was still 17, I didn’t come home on the bus with the players, so spent the evening with my parents back home and celebrated with them”

Ian Bowyer would leave that Summer. A dispute with the board over his son Gary joining Nottingham Forest led to his departute.

“I was disappointed, I had broken into the 1st team and then your wondering who would come in next”

Colin Addison had great success at Hereford in the 1970’s and would return to the club for a 2nd spell.

Unfortunately the glory days didn’t come back and the club finished in 17th position. Jones made 18 league appearance’s in the 1990/1991 campaign and scored a Football League goal away at Scarborough on the 11th May 1991 in a 2-1 defeat.

“I was very pleased to get on the scoresheet, but disappointed we lost, but to score at a young age was a great feeling”

Addison departed that summer and another manager who had huge success in the 1970’s returned. This time it was John Sillett. Jones though hardly featured during the 1991/1992 season.

“John Sillett had his own players, he didn’t give the youngsters much chance which was his choice and I got released at the end of the season”

Jones would then drop into non league football playing for Newport and Cinderford. “It was different as I was use to training every day, but I had to get a day job and then train a couple of evenings a week”

Jones currently works as a postman and returned to Hereford in 2019 for the reunion.