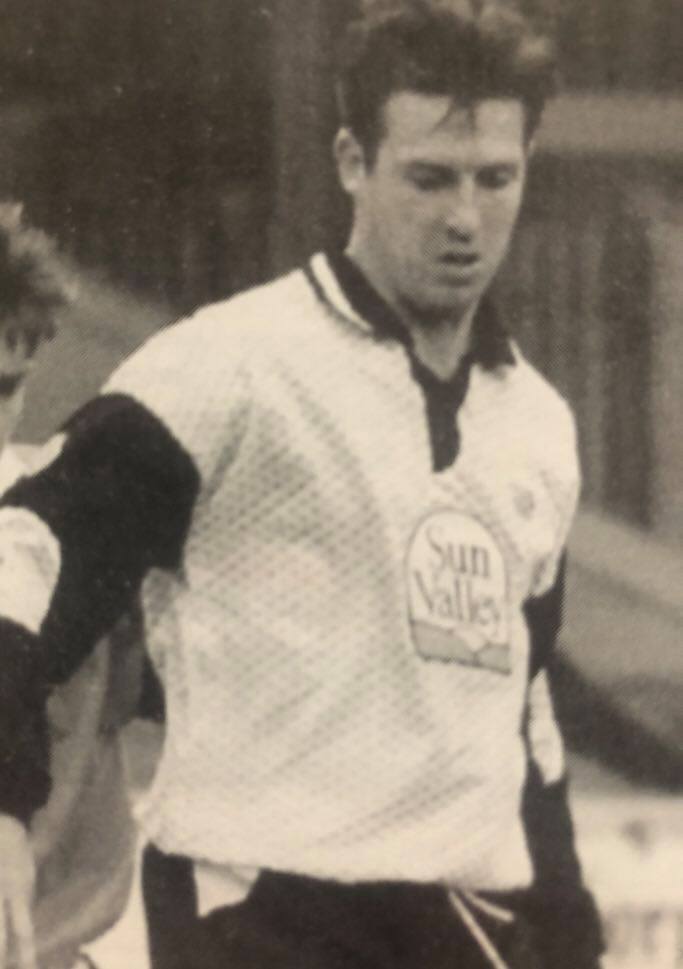 Owen Pickard was born in Barnstaple on the 18th November 1969. He started his professional football career at Plymouth Argyle and after being released by the Devon side, he joined Hereford United in the summer of 1992 on a free transfer.

I asked him what bought him to Edgar Street.

“It was League Football to be honest, Greg (Downs) had played in an FA Cup final with Coventry in 1987 and won it, so that was inspiring, he was a good manager and I knew he would improve my game, I had offers abroad, but wanted to stay in England playing full time football”

Pickard arrived at the club alongside Max Nicholson from Doncaster Rovers and Colin Anderson from Walsall. The budget at Edgar Street had been slashed. The previous year John Sillett had returned as manager to a great fanfare, but after heavy investment in players, the season was a disappointing one, this would be Greg Downs first full season in charge at the club.

Pickard had a dream start to his Hereford career scoring four goals in his first week at the club. He scored a sensational volley in the opening game 1-1 draw against Scarborough, a brace midweek against Torquay in the Coca Cola Cup which ended 2-2, he rounded it off with the winning goal away at Darlington on the warm Friday evening of the 21st August 1992.

“The goal against Scarborough on the opening day was special, Derek Hall passed it to me and on the turn I volleyed it into the top corner. It gave me confidence scoring the goal, but you gain a lot more when the goal is extra special”

The goals continued for Pickard as Hereford faced Yeovil in an FA Cup 2nd round replay on the 16th December 1992. A 0-0 draw at Huish Park bought the tie back to Edgar Street and the chance to face Premier League Arsenal at home in the 3rd round of the competition, unfortunately Hereford would lose 2-1.

“When you’ve drawn away and then coming back home and knowing that the winners would play Arsenal. It was really disappointing to be knocked out by a non league club, our manager (Greg Downs) got sent off and it probably cost us the game”.

Pickard had equalised to make the score 1-1, but Yeovil won it at the death and the Bulls missed out on the financial windfall of facing the Gunners.

Pickard would link up with Simon Brain as the preferred striking partnership for the majority of the 1992/1993 season.

“Simon was a really good lad, plenty of passion, he played the role I did in my 2nd season, he created the chances and did all the dirty work, whereas I put the ball in the net.

Hereford were involved in a relegation battle towards the end of the season, but a run of one defeat in the last ten games meant the club finished 17th and away from the trapdoor of relegation to the GM Vauxhall Conference.

Pickard scored crucial goals in the draws against Scunthorpe United and Shrewsbury Town late in the season to keep the points tally totting up.

Pickard would remain at Edgar Street for the 1993/1994 season. Chris Pike had been signed from Cardiff City to lead the attack. Simon Brain was recovering from a broken leg sustained whilst on loan at Bromsgrove Rovers. Another striker in Leroy May had also been added midway through the previous season from non league Tividale. Pickard and Pike would start the season as the preferred striking partnership.

Pickard scored two goals in the first three league games of the 1993/1994 campaign in defeats against Chesterfield and Lincoln City. Hereford though started badly losing their first four games and were rooted to the bottom of the Football League.

The Bulls were involved in another relegation battle and another defeat to non league opposition in the FA Cup. A 2-1 defeat away at Bath City saw the Bulls knocked out again in the 2nd round, but the club reached safety with three games to go.

Unfortunately Pickard struggled with goals and only scored five in the league during the whole season. Chris Pike who had signed from Cardiff City would score around 20 goals that campaign.

“Pikey, what a finisher, excellent goal scorer, but the roles were reversed the previous season where I scored the goals, Now I was doing most of the hard work, whereas Chris was more of an immobile striker, I did all the chasing and running down the channels, whereas he was finisher”

I asked Pickard how the lack of goals effected him in his 2nd season at Edgar Street “It definitely had an impact on me, you know your not going to get many chances when your chasing lost causes and not in the box as much, often fans don’t see the players who do all the hard work, its difficult as your confidence starts to erode, then the fans start to question you, as a striker you are judged on your goals, the 2nd season was not as enjoyable for me at Edgar Street”

“It was a bit of a joint decision with me and Greg Downs, things weren’t going too well, I had a great time with great people at Hereford, we had a limited budget, as a team we had to scrap every game, we managed to pull together and stay off the bottom, it was tough, but an enjoyable two years, the fans were great to me, we had a superb captain in Derek Hall, who was easy going most of the time, but in the dressing room at half time and full time if you weren’t pulling your weight he would let you know, but he scored an incredible amount of goals from midfield for us”

You can see some of Pickard’s Hereford goals in the below video.

After leaving Edgar Street Pickard had a brief trial at Rochdale, but returned back home to the south west and dropped into the non league game with Dorchester in the Beazer Homes League (Now National League South), after three seasons of scoring plenty of goals, he was courted by newly promoted Cheltenham Town, but eventually joined Conference side (Now National League) side Yeovil Town and spent two seasons at the club. When Yeovil faffed around offering Pickard a new contract, he decided to drop back down to Dorchester and later had a spell at Bideford, He also managed Barnstaple Town.

I asked Pickard what he does now for a living.

“I’m a chiropodist now, it pays the bills, I watched Hereford FC play at Bideford and Barnstaple a few seasons ago when they were in the South West league. Its great to see them back after the old Hereford United went bust and hopefully they will return to the Football League at some point” 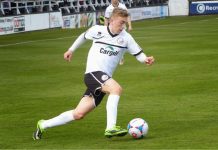