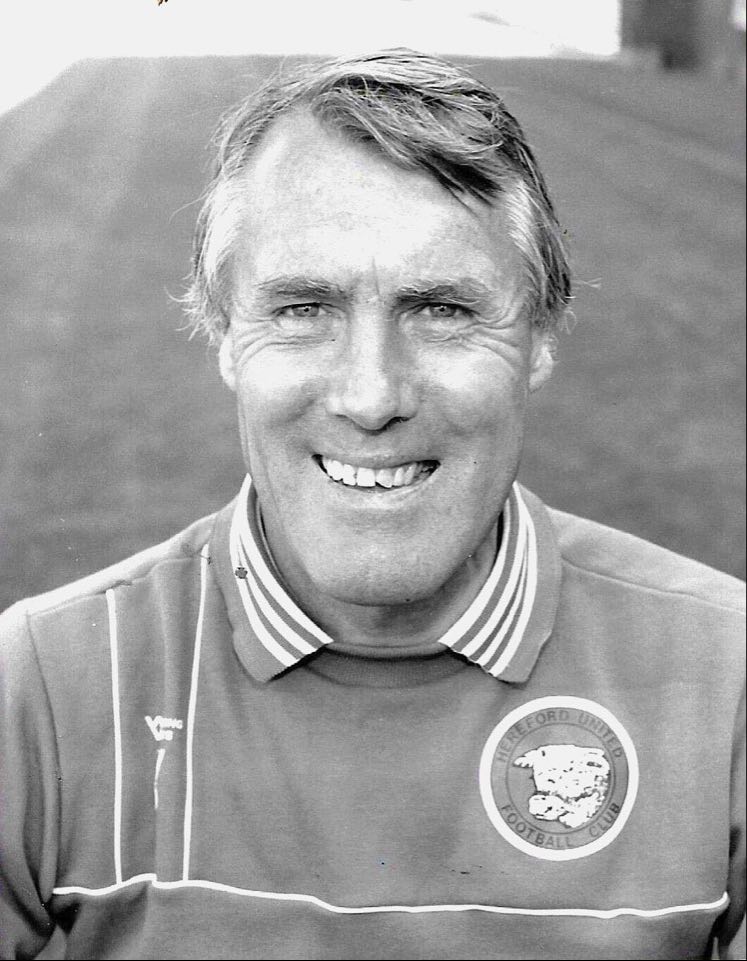 John Newman was born in Hereford on the 13th December 1933. He was a Hereford United fan as a boy and was an amateur player at Edgar Street. He started his professional career at Birmingham City. His biggest match for the club was playing in the 1956 FA Cup final for the Blues where they lost 3-1 to Manchester City. This was the game where City goalkeeper Bert Trautmann played the last seventeen minutes with a broken neck.

Newman later played for Leicester City, Plymouth Argyle and Exeter City. After retiring as a player he then managed Exeter City, Grimsby Town and Derby County, he arrived at Edgar Street as manager in March 1983 after the club had parted company with Frank Lord.

John’s initial greeting to most people was “Alright kid” Phil Stant mentions this in his autobiography, so when I first call John and i’m met with the comment “Alright kid” I know I’ve dialled the right number.

I started off by asking John about his time watching Hereford United as a young boy “I used to go with my dad. It’s a good job Fred Turner (Club Secretary) is not alive as my dad used to push me through the turnstiles and get me in for free”

After leaving Hereford to pursue a career in playing and managing, it was great to see Newman return to his home city to take charge of the club in 1983. The club though was in a financial mess and the glory days of the 1970’s seemed light years ago “We had been been finishing in the bottom four quite regularly so we had to apply for re-election pretty much as soon as I arrived” Hereford would finish bottom during the 1982/1983 season, but Newman had only had 12 matches in charge “Me and the Chairman (Peter Hill) had to go down to London to make sure we got enough votes to stay in the league, luckily we did and it was a clean slate next season”

Newman had inherited a squad low on confidence “A lot of the players were past their best days and we had to reconstruct the squad, I knew a few players that were available and persuaded them that Hereford was the place to resurrect their careers”

One of these players was Ollie Kearns who was signed from Walsall in the Summer of 1983 “Ollie was important as he was a goal scorer, he had a great deal of experience and did a brilliant job for me and the club”

The 1984/1985 season would be Newman’s most successful even though he nearly left the club mid term. In December 1984 he was approached by Plymouth Argyle to become manager at Home Park but he rejected their advances to stay at Edgar Street.

The club would finish 5th in Division Four (Now League Two) and also reach the FA Cup 3rd round and face Arsenal. The first game at Edgar Street ended 1-1, but the Bulls were defeated 7-2 in the replay at Highbury.

“I enjoyed the Arsenal games, the first match we played ever so well, we went a goal down, but equalised, we should have won the game at the end, the experience the players gained from going to the replay was good for them even though we lost 7-2”

Hereford were top of the league Mid March 1985, but sadly fell out of the promotion picture and finished 5th (Back then there were no play offs and the top four went up) I asked Newman what went wrong “I wanted to sign a couple of players but for whatever reason the board didn’t give me the funds to sign them”

The following season Hereford reached the area final of the Freight Rover Trophy,. They faced Bristol City over two legs. The winners would face Bolton Wanderers in the final at Wembley Stadium. Hereford won the first leg 2-0 at Edgar Street, but would lose 3-0 at Ashton Gate in the 2nd, leg subsequently losing 3-2 on aggregate “It was one of the most disappointing things that happened to me in my career, we took a 2-0 lead to Bristol. It wasn’t enough to see as through”

The financial situation at Edgar Street was always precarious “The club supported me as much as they can, but when I needed a player we just didn’t have the money”

Newman though had an eye for a bargain. Phil Stant was signed for £600 from the army. He was later sold to Notts County for £175,000 making the club a substantial profit “Phil played in a couple of reserve games for us, I could see potential in him, he was army fit, but not football fit, but it was great to see him have a decent career in the game”

A highlight of the Newman era was a 6-0 win at Burnley on the 24th January 1987. Stewart Phillips scored a hat trick that afternoon. “It was amazing, the goals were flying in. It doesn’t seem right Hereford going to Burnley and scoring six”

Newman sadly would leave Hereford in October 1987. His final game was a 1-0 loss at home to Peterborough on the 30th September 1987. “It was a combination of things, The first two years I could manage the travelling as my mother was living in the city, but I was living away from Hereford and having to commute from Derbyshire it was becoming too much, so we agreed to part ways”

Ollie Kearns was still at Edgar Street when Newman departed and he was sad to see him go “I really enjoyed playing for John. I had a huge respect for him, arguably since John left you could see a slow decline of the club”

Newman would then become Assistant Manager at Notts County under John Barnwell and then Neil Warnock, he would then link up with Mansfield Town in the early 1990’s after he left Meadow Lane.

Newman now lives near Mansfield but maintains an interest in Hereford FC “I follow their results and its my hometown team. I’m a Hereford lad and that will never change”