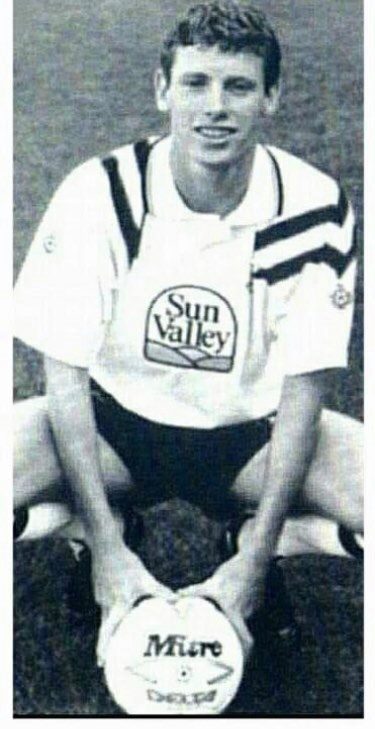 Gareth Davies was born in Hereford on the 11th December 1973. He grew up just across the border in Talgarth Wales and with his cousin being the former Hereford United, Liverpool and Everton player Kevin Sheedy there was a football connection in the family.

Davies joined Hereford in 1990 as a YTS player. He told me “I was offered a deal at Swansea City for three years, two years YTS and one year as a professional, but I was a big Hereford fan and wanted to play for the club. My dad got in contact with Ian Bowyer (Hereford Manager) who came to see me train and he offered me a deal”

“I remember my first day at the club. Peter Isaac (club physio) welcomed me by giving me a clip around the head. I swore at him and he whacked me again. I asked him why he did it. He said to me “Remember where you are and what you are and the 2nd clip was for swearing at me” “I’ve always remembered what Peter told me and it was fantastic advice”

In his 2nd season as a YTS trainee Davies made his Football League debut away at Scarborough on the 7th April 1992. The game ended 1-1 with Simon Brain scoring the Hereford goal. “I knew I would be playing and I was very nervous, it was a long journey up there to Yorkshire. Back then football was tough. It was a cross between bullying and character building. There were some big characters in the game at the time”

Davies continued “I remember in my early days playing against the old centre forward Billy Whitehurst. He was known as one of the hardest men in football. He would try to intimidate me. He said to me with a growl “If you take the ball off me I will break every bone in your body” He ended up being subbed that day and at the end of the match he said to me “well played son” He wanted to see if I would bottle it. It was a great education for me back then”

Davies would play three more league games that season for Hereford under the management of John Sillett.

The 1992-1993 season saw Greg Downs take over as manager and Davies would be a first year professional. Davies would share central defensive duties at the start of the season alongside Andy Theodosiou and Steve Devine.

“Greg was good. I did most of his running for him as he was player manager. He was slightly ahead of his time with his analytical approach, but I liked him as a gaffer. Colin Addison had an assistant called Bobby Smith who was a bit old school, so Greg had a different approach.

Tall central defender Kevan Smith was bought in on loan from Darlington to help Davies. He would later sign full time the following season after his release from Feethams.

Smith was known by manager Greg Downs from their time together at Coventry City. “Kevan was bought in to teach me some old school tricks, like treading on opposition players toe’s during corners and general gamesmanship to wind them up”

Davies scored his first league goal in a 3-0 win over Halifax Town on 31st October 1992.

He ended his first season as a professional with 32 league appearances. Hereford were involved in a relegation battle, but a good run of form in the last 10 games secured the clubs survival. Davies played in the final game of the season which saw Hereford beat Halifax Town 1-0 and the Shaymen ended up being relegated to the GM Vauxhall Conference.

Davies was also attracting interest from the Premier League. “I had a 3 week trial at Liverpool and played in a practice match. Unfortunately they ended their interest in me”

The 1993/1994 season was a struggle for Hereford and the club lost their first 4 league games. The first home win came on 25th September 1993 with a 3-0 victory over Wigan Athletic. Davies’s cross set up Leroy May for the 3rd goal.

Davies also had the opportunity of playing against the crazy gang of Wimbledon in the League Cup. “That was an experience playing against John Fashanu. In the 1st leg at Edgar Street he shouted to goalkeeper Hans Segers, ‘Hans, kick me the ball, I’m a warrior, a leader of men, there is a shield around me, no one can touch me’.”

Davies then added: “Segers threw the ball to future England full back Warren Barton, who then smashed the ball towards Fashanu, we both ran to the ball, but Fashanu head butted me, he snarled, ‘don’t show no pain to me wee man’. I was 19 and thought this is mad.”

Davies would make 32 league appearances in the 1993/1994 season as the Bulls finished 20th and avoided finishing bottom.

The following campaign Greg Downs was given serious money to invest in the squad. Hereford United had sold Darren Peacock to QPR in December 1990 and when he was then sold from Loftus Road to Newcastle United the club received a sell on fee.

The likes of Tony James, Dean Smith, Nicky Cross, Richard Wilkins and Steve White were bought in. Davies was suffering with disciplinary problems. After the first seven league games of the 1994/1995 season he had already received two red cards in the 2-0 loss to Preston and a 1-1 draw with Torquay.

I asked him whether the frustration of not achieving a move was affecting him.

“Yes, most definitely. I was trying so hard to get a move to the Premier League, but nothing came off and I was then mis-timing tackles because I was trying too much”

A week after a famous 1-0 win in the League Cup against West Brom in September 1994 manager Greg Downs left the club. He would be replaced by his assistant John Layton.

Davies would show his versatility in the squad by filling in the midfield and also playing as full back if needed. The late Dick Bate had arrived as coach to assist manager John Layton. “Dick was generations ahead of what he was doing. He introduced semi zonal marking. He was unbelievable in his approach. A totally calmer coach than I had experienced before, there wasn’t any ear bashing’s”

His final Hereford match was a 0-0 draw with Mansfield on Easter Monday 17th April 1995. Hereford ended the season in 16th position.

Davies signed for then Division One (Now Championship) Crystal Palace in the summer of 1995 for a fee of £120,0000

“I had got myself fixed up with an agent called Jonathan Barnett. Les Sealey was involved too and I went down to Selhurst Park and met with the management team of Steve Coppell and Ray Lewington and they sold the club to me. It was a fantastic experience moving down there. Davies was part of the Crystal Palace squad that reached the Premier League the following season and Davies played in the top flight during the 1996/1997 season.

Davies would then suffer with injury problems. He had a loan spell at Cardiff City and later joined Reading and Swindon Town on a permanent basis, but had to retire from the professional game in 2002 due to a persistent knee injury.

I asked him if he ever was approached to come to Hereford on a part time basis? “Yes, I was playing for Chippenham Town and I got in a conversation with Hereford manager Graham Turner. He suggested me playing part time for the club and combine that with a football in the community role which had always interested me. Unfortunately the deal I was offered wasn’t attractive and it fell through. It was always my dream to come home”

Davies then took a job with the Welsh FA. “I did my coaching badges with the likes of Thierry Henry and Patrick Vieira”

In September 2018 Davies answered an SOS from Hereford FC to take caretaker charge when Pete Beadle and Steve Jenkins had left the club. “I had a phonecall from the board asking if I could help out. We had a number of injury problems and the players were missing Pete Beadle. The squad was low on confidence.

Ryan Green helped me out and we shared the responsibility. We deserved more in the games we played. The highlight was going down to Truro in the FA Cup and after being 3-0 down winning 4-3. We changed the system five times that night”

Davies currently works for the Welsh FA but has some amazing memories of his time at Edgar Street “When things are back to normal after Covid we are going to have a reunion at Edgar Street with the old YTS players. The past year due to the pandemic a lot of players have had the time to research their past and social media is great for linking up with ex colleagues.