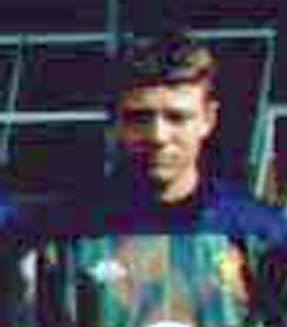 Brian Thomas was born on the 7th June 1976 in Neath and currently resides in Briton Ferry, he was taken on initially as a YTS apprentice at Hereford United in the summer of 1992. Thomas told me how it all started.

“I was playing in a youth match at Merthyr Tydfil and my mate Chris Williams was playing who had also signed for Hereford United. John Layton (Hereford youth team manager was at the game) and I had a blinder of a 2nd half and he offered me a YTS apprenticeship. I had interest from Cardiff City and Bristol City, but with Chris moving up to Hereford as well the move to Edgar Street appealed to me.

Thomas initially found the move extremely hard “The first six weeks were the toughest of my life as I was massively homesick. I was living in digs at Ryelands Street with Colin Oliver who was the stadium manager at Edgar Street, we used to spend a lot of time playing snooker at the Potting Shed at the end of the road”

Peter Isaac was the Hereford United Physiotherapist/Trainer/Kitman/Did every job at the ground and Thomas heaps praise on him “I think Peter looked out for me as I was a welsh lad and a goalkeeper like he was. He gave me the odd clip around the ear, but he went out of his way to look after me and make sure I was ok”

The Hereford United YTS team in Thomas’s first season won the West Midlands Youth league and also the Welsh Youth Cup final. “We had a great mixture of players, there were the local lads like Phil Preedy and Paul Eversham, plus the lads from away like Craig Langford, Mick Lees and Rob Tivey, we had some bad luck with injuries the 2nd season, Mick and Rob both broke their legs and so did a lad who called Mark Cross who had just broke into the 1st team, he got injured away at Cheltenham and it was one of the worst injuries I’ve ever seen.

The camaraderie of being a YTS player is well known so I ask Thomas if he has any favourite memories off the pitch “Most of the stories I can’t tell you as they are unprintable, but here’s one for you, we played Derby County at the Baseball Ground and then came back to Hereford, we went out to this wine bar and were smoking cigar’s. Little did we know we were in Saxty’s which was owned by the Chairman Peter Hill, John Layton found out about it and ran us to death up Haugh Woods the next day”

Thomas would make his Football League debut in his 2nd season. “I was still a youth team player and the likes of Andy Brownrigg and Neil MacKenzie joined who both went on and played in the Football League, but the rules changed that year so teams could have two normal subs and a goalkeeper, but you could only use two subs during the game. The club couldn’t afford another professional goalkeeper so I would sit on the bench for most games. I remember Alan Judge got sent off later in the season at home to Mansfield and we had used our two outfield players so I couldn’t come on and Dave Morris had to go in goal who was a defender”

Thomas made his Football League debut in a 3-3 draw away at Walsall on the 2nd October 1993. “Alan Judge got injured in the warm up so I had to go in goal, I did ok. I didn’t have time to get nervous. Dave Morris scored a last minute equaliser for us”

Thomas was involved in the following week, but things took a turn for the worse when Hereford were hammered 6-0 away at Crewe Alexandra “I didn’t have the best relationship with the manager Greg Downs, I was only 17 years of age and I hadn’t matured physically as a person. Greg was under a lot of pressure but I think he should have taken that into account. The Hereford fans were brilliant that day, we had just been hammered 6-0, but they were singing my name at the end”

Thomas played in a couple of Welsh Cup victories and kept two clean sheets in the 3-0 and 4-0 wins over Mostyn and Newtown respectively towards the end of 1993.

His 3rd and final Football League appearance came away at Chester City on the 23rd April 1994. Alan Judge was serving a one game ban and Thomas was back in the nets in an afternoon where Chester won promotion with a 3-1 win “Greg thought I was to blame for the three goals and he wasn’t particularly great to me after, but I understood he was under a lot of pressure from the board and fans at the time”

Thomas completed his 2 years YTS apprenticeship and remained at the club for the start of the 1994/1995 season on non contract forms and made it onto the team photograph. “I was a bit taken aback that after Alan Judge left the club Greg then bought in two more goalkeepers, so I was now 3rd choice. I knew Tony Pennock as he was a Welsh lad and Chris MacKenzie was signed from non league. I was on a non contract basis, so I was playing for Afan Lido in the Welsh League to get some experience”

Thomas then had a meeting with Greg Downs in September 1994 “We had just beaten West Brom in the League Cup and were due to play Nottingham Forest in the next round. Tony Pennock and Chris MacKenzie were both injured. Greg asked me if I would play in the Forest game. I said I would but only if I would be offered a longer contract at Hereford. Greg said he didn’t have the budget so we shook hands and parted ways. I was conscious I didn’t want to lose my place at Afan Lido as we were doing well, then a couple of days later Greg gets sacked and John Layton who was my youth coach was appointed manager!, I had missed my chance and the club signed Jon Sheffield on loan”

Thomas though has fond memories of Hereford United. “It was the best two years of my life, I played in the Football League and made so many great friends. It was a great experience for me”

I asked Thomas what happened next. “I stayed down at Afan Lido. I had about 15 seasons there and made something like 460 appearances. I hold the record for matches played, we did well and finished 2nd one season, we played a team from Latvia in the UEFA Cup. It was a brilliant experience. We were featured on Sgorio (Welsh Football programme) a lot on S4C and I came across a lot of ex Hereford players in the league like Chris Pike, Richard Jones and Gareth Abraham”

Thomas now works for TNT in South Wales, but has so many happy memories of Hereford. “I visited a couple of years ago as I’ve got a mate who lives near the train station, once Covid is over we are going to plan a reunion with the rest of the YTS lads and get to a game one afternoon”

*Main photo supplied by Ron Parrott, the rest by the MH Archive