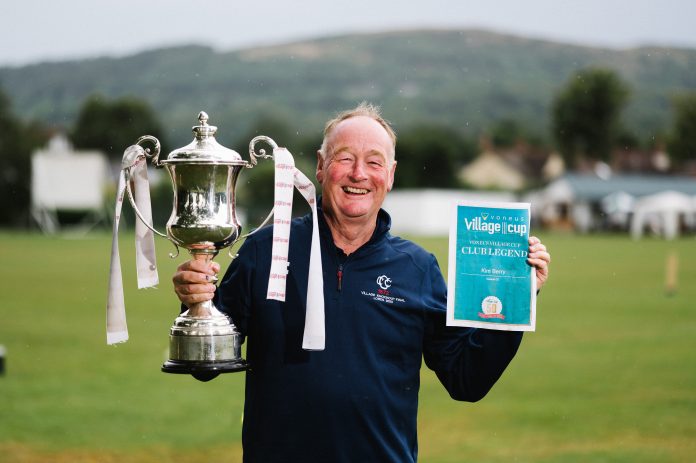 The chairman of a Herefordshire cricket club has won a national grassroots cricket award for his efforts developing a welcoming and inclusive atmosphere at the club.

The award celebrates individuals who show dedication and passion to the sport and their communities.

As chairman of the club for the last five years, Kim has overseen an overlapping of the club into the local community, helping turn the side into the hub of the village after moving back to the area in the late 2000s.

Kim said: “My heart is at Colwall. I’m fortunate that my wife is very tolerant and accepting that for five or six months of the year, cricket clubs form most of my life.

“Sometimes cricket clubs can stand aside a little bit from the community, so I wanted it to become a part of the community and I think we’ve nearly reached that.

“I wanted the club to be like when I was a child: family oriented and children playing cricket on the sidelines. Saturday afternoon, the benches are full around the ground, and people are coming down and enjoying themselves socially – it brings joy to my heart.”

Kim, who grew up in a house next door to the club’s ground, is a second generation of the Berry family to serve the club.

His father George served as chairman and groundsman until his death in 1977, his uncles played in the side’s First XI and his mother made teas for the players for 56 years.

Kim and his two brothers, Adrian and Jonathan, have continued the Berry family’s legacy at Colwall, with all three having captained the first XI while Adrian is currently the club’s president and Jonathan is heavily involved in volunteering.

Since Kim took the role of chairman, the side has now expanded to feature four men’s Saturday competition sides, a women’s team with 45 members and more than 200 children from the village and surrounding areas playing junior cricket.

Kim added: “It seemed like a closed door before. People didn’t quite know how to become a member, didn’t know what was behind the cricket club, so it was about opening it up and making people informed, and telling them we’re a welcoming cricket club and we want to see you there.

“It’s about coming in and having some fun; there are too many worries and woes in life. We’ve done a lot of work and I think people recognise the effort that’s gone in, and we’re going in the right direction.”

Under Kim’s stewardship, Colwall have managed to add national silverware to their trophy cabinet, beating Redbourn by six runs at Lord’s to get their hands on the Village Cup trophy in 2020.

Colwall CC First XI captain James Wagstaff, who nominated Kim for the Voneus Village Cup Club Legend award, said: “Kim, without a shadow of a doubt, deserves this recognition due to his commitment and hard work to get Colwall to where it is today.

“This would be a tremendous accolade to someone who has put everything into making the cricket club the centre of the village and the community.”

Head of community engagement for Voneus, one of the UK’s largest rural broadband specialists, Zoe Day said: “Bringing rural communities together is one of our top priorities and Kim is a brilliant example of one of the many club members across the country who are passionate about making that happen through the lens of sport.

“Bringing together the village and surrounding areas by encouraging an open and inclusive atmosphere where anyone can feel welcome is just a testament to the wonderful work Kim has done promoting the sport in the region.

“He is truly deserving of the status of being a Voneus Village Cup Club Legend. Well done, Kim!”