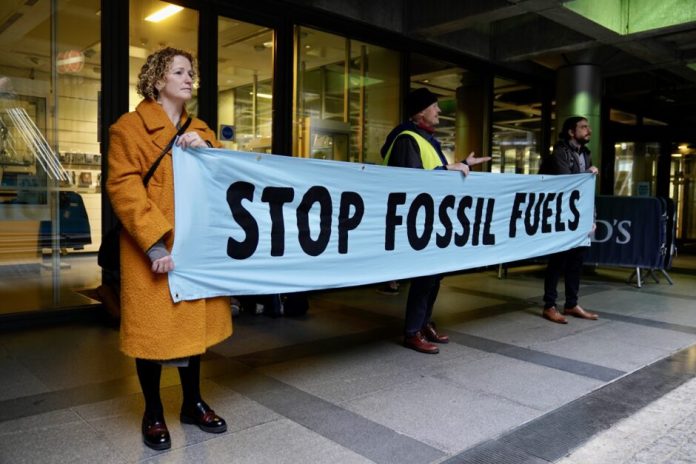 Extinction Rebellion protesters stopped staff from entering the building of a huge London based firm, as protests continued on Tuesday (12th April).

More than 60 people from Extinction Rebellion blocked the entrances at Lloyd’s of London headquarters (1 Lyme St, London, UK), preventing staff from entering the building. The action aimed to close the London based insurance and reinsurance giant for the day. Extinction Rebellion is demanding that Lloyd’s of London stop insuring fossil fuels projects, and highlighted the Trans Mountain Pipeline extension in Canada, which they believe is being insured through the Lloyd’s marketplace.

People used superglue, chains and bike locks, to block over twenty-five entrances to the building. Staff already inside were allowed to exit. Climbers also scaled the outside of the iconic building and dropped two banners, saying ‘End Fossil Fuels Now’ and ‘Insure Climate Justice’.

Clare Walmsley, a spokesperson from Extinction Rebellion, said: “We’re here to demand an end to all new fossil fuel investments and insurance. By underwriting the world’s most deadly fossil fuel projects, they are creating climate chaos – floods, famine, wildfires and death. Insuring new oil and gas projects in the North Sea will do nothing to solve the cost of living crisis either. Instead, it locks us into a system that’s already pushing millions into poverty.

“We can see from Lloyd’s long racist history, that it has always been happy to trade lives for profit. Its business was kickstarted by insuring the trans-Atlantic slave trade. Today its underwriters support projects that sacrifice Indigenous, Black and brown communities on the frontlines of fossil fuel extraction and climate breakdown.”

The action is part of the April Rebellion and comes after 10 days of ongoing disruption across the UK from Extinction Rebellion and the Just Stop Oil coalition, resulting in fuel shortages all around the country. Both groups have vowed to continue disruption until the government stops all new fossil fuel investments.