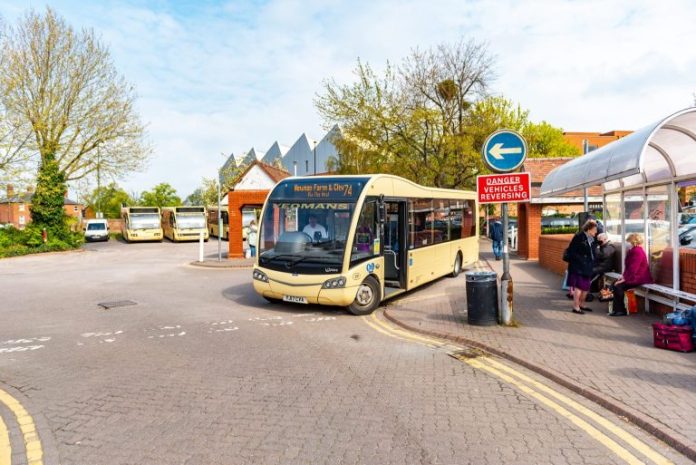 Herefordshire Council has moved swiftly to secure bus services in Hereford following the announcement by Yeomans that it was withdrawing a large proportion of its commercial services from January 2022.

The council has awarded a contract to Sargeants Brothers Ltd to operate a number of temporary bus services in Hereford from Tuesday 4 January 2022. This will ensure the continuation of essential services, and will reinstate buses for Belmont and the Royal National College for the Blind at Venns Lane following the withdrawal of services for these locations in September. Sargeants existing A service will also provide an essential link between the Tesco city bus station and Tupsley for pupils travelling to Bishops School.

The following services will be operated by Sargeants:

Timetable information can be found at https://wwww.sargeantsbros.com/timetables/

Cllr John Harrington, Cabinet member for transport and infrastructure, said: “I am delighted that we will have a continuation of services for city bus users and this will include reinstatement of some routes which were withdrawn in September. We are also looking at the longer term provision for the city to implement our ambitions for an improved overall service and are awaiting government feedback on the request for £18.1m from the national bus strategy. We have invited proposals from operators and will consider these early in the New Year.”

All this comes after both Herefordshire Council and Yeomans Travel issued statements earlier this winter.

Local bus operator Yeomans has provided notice that it intends to withdraw a large proportion of its commercial services in Hereford from 1 January 2022.

The council has held discussions with Yeomans to request that they delay their withdrawal of services until April 2022. This would provide time for the council and local operators to plan and put in place alternatives to ensure continuity of service for people currently reliant on Yeomans bus services. Yeomans have declined this request.

The council is holding discussions with other operators regarding replacing the withdrawn services, or putting in place alternatives on a commercial basis so that some continuity of service might be maintained. Due to the very limited timescales involved it is unclear if any operators will have sufficient time to put alternative services in place.

The council recently submitted an £18.3m funding bid to Department for Transport as part of the national bus strategy and hopes to receive additional funding to invest in buses from April 2022. Following the announcement made by Yeomans, the council has decided to bring forward plans for improvements to bus services and is requesting formal proposals from operators for an improved bus service for Hereford City. Depending on proposals and confirmation of funding from government it is hoped that new services could commence as soon as April 2022.

In the interim, the council will be seeking to tender some replacement services which will be in place from January 2022. This will guarantee the continuation of essential services, including school services, as the council progresses permanent proposals for the city network

“The timing of the withdrawal of these commercially operated services is of great concern and does not appear to take into account the issues which will be faced by the people who use and rely on these services.

“We have been meeting with all of our local operators regularly since the beginning of the pandemic and more recently to develop proposals for an improved county network and it is disappointing that only minimum notice has been given for these significant changes”.

“There is a great deal of work to do now to try and ensure that we put some temporary services in place but also to seek comprehensive proposals from operators which match our ambitions for a much improved service for the city. We have provided operators with an outline of the elements we think are important including better buses, increased service frequency and operating hours, a strong customer focus and a clear commitment to promote services and increase patronage. I think that there are operators that share these ambitions and are keen to work in Hereford.”

How will this affect my journey?

The following routes are affected:

The withdrawals include school services from Credenhill to Whitecross school, and the City to Bishops school.

The council will be seeking to tender some replacement services which will be in place from January 2022. This will guarantee the continuation of essential services, including school services, as the council progresses permanent proposals for the city network

An update on alternative arrangements for school services will be provided through schools in early December.

Yeomans has provided the statutory minimum notice of 4 weeks to the council after which time it will provide the Traffic Commissioner with a further 6 weeks’ notice.

Further information can be found on the council website: www.herefordshire.gov.uk/public-transport-1/bus-travel/3

How is Herefordshire Council supporting bus travel in the county?

The covid pandemic has had a significant impact on bus patronage nationally. Herefordshire Council has supported local operators by funding them at 100% of their pre-covid rates for concessionary travel throughout 2020/21 and the current financial year. It has also facilitated direct grants from government which have aimed to supplement lost revenues (Covid Bus Services Support Grant).

During 2021 the council has progressed development of the Bus Service Improvement Plan and submitted its proposals to Government with the aim of securing additional funds to support bus services from April 2022. Development of the plan has included public consultation and engagement with all of the local bus operators. The BSIP was submitted to government by the end of October 2021 as required by the national bus strategy and will be assessed and inform government funding for local buses for 2022/23 to 2024/25. Government has not confirmed when funding awards will be announced but it is hoped that this will be well before the end of the 2021/22 financial year to inform decision making about funding service improvements.

Yeomans Travel have made the difficult decision to withdraw most of their commercial bus services in the City of Hereford, the last day being New Year’s Eve, Friday 31st December 2021.
Yeomans Travel has been family owned for over a century and currently provides bus and school services, contracts, private hire and holiday tours. In September 2015 we stepped in and kept the bus services running when First closed their Hereford depot citing that it was not viable to operate with such low passenger numbers.

Most of the Hereford city bus services are run on a commercial basis without any Council subsidy. The Government had given financial support to all bus companies during the Covid crisis to keep some services operating but this finished at the end of September. Since then we have continued to operate these services without support but this is not sustainable.

In recent years, and especially since the start of the Covid pandemic, the number of passengers carried has been in slow decline as more people have bought cars and traffic congestion in the city has got steadily worse. The rise of out-of-town shopping and employment centres has also reduced demand for travel into the city centre. There have been no discussions with local operators about bus priority or traffic issues until recently when the Government unveiled a package to local councils to assist bus travel.

We are now carrying only 50% of the numbers of bus passengers that we were carrying in 2019 and this is unfortunately typical of bus services across the whole of England and like many others are also having to absorb the large increase in fuel costs.

Whilst Yeomans Travel is aware that Herefordshire Council is working on a new Bus Strategy that will involve support for bus services across the County, we are having to act now to protect the future of the Company. We are upset that the Council have not even mentioned the reason we are stopping these services in their press release. When we informed them, with the reasons behind it, they offered no assistance or asked what they could do to help other than to ask us to carry on until April. If it is not financially viable, why would we continue until then? There was not even a thank you for stepping in with six weeks’ notice and solving the problems 6 years ago when First did the same thing only on a bigger scale.

Therefore the following services will be affected from this date:
City services 71 (Credenhill), 72 (Bobblestock), 74S (Bishops School), 77A (College Green and Bobblestock circular), 79A/88 (Putson and Redhill) will be withdrawn.

Service 74 to Newton Farm will continue to operate but the route via Hunderton will be withdrawn. Service 78/78X to Rotherwas/Skylon Park will also continue to run.

We had given Herefordshire Council the statutory notice required before withdrawing these bus services and they have already published a tender to operate emergency timetables on these routes, which they also failed to mention. These will now be financially supported, if we had been offered this we would have continued operating these services which would have meant no disruption to services at all and saved a lot of time and effort all round.

There are no job losses created by these changes and we will still be operating our subsidised services throughout Herefordshire.
We would like to thank our staff for their hard work and passengers for their custom and support over the years but we cannot continue to operate something that is not commercially viable.