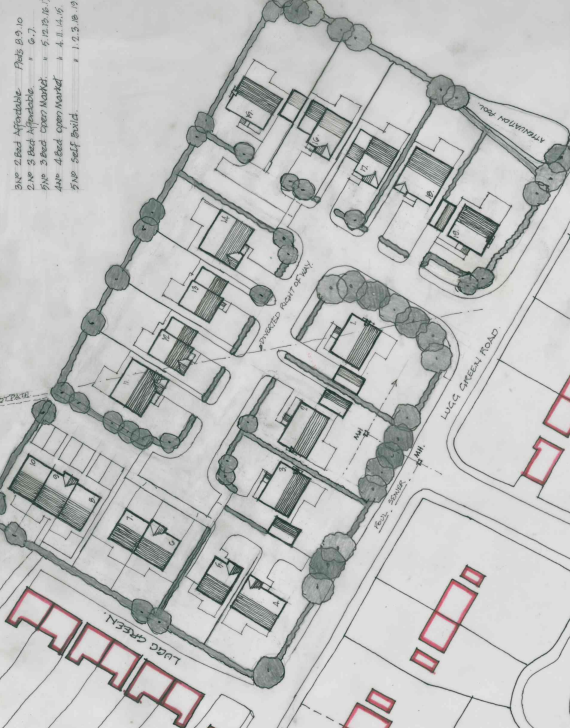 The farmer at the centre of an investigation into damage to the riverbank next to the River Lugg in Herefordshire, had planning permission for 19 new homes near where the work has taken place REFUSED earlier this year.

Mr John Price had planned to build 19 new dwellings on land near the River Lugg in Kingsland but was refused by Herefordshire Council for the following reasons.

THE COUNTY OF HEREFORDSHIRE DISTRICT COUNCIL hereby gives notice in pursuance of the provisions of the above Acts that PLANNING PERMISSION has been REFUSED for the carrying out of the development described above for the following reasons:

1) The proposal represents unjustified unsustainable new residential development in an open countryside location, outside of the defined settlement boundary within the Kingsland Village Neighbourhood Development Plan. As such, the residential development is contrary to Policies SS1, SS7, SD1, RA2 and RA3 of the Herefordshire Local Plan Core Strategy, together with Kingsland Neighbourhood Development Plan
Policies KNDP1 and KNDP2. The proposal is also contrary to the relevant aims and objectives of the National Planning Policy Framework.

2) The proposal would result in material harm to the landscape character of the village. Kingsland’s linear evolution is no precedent for development following a similar pattern to the north. It is considered the scheme would urbanise a country land and unacceptably extend the built form into the open countryside and fail to retain the landscape character of Kingsland. In doing so, the development is contrary to Policies SS6 and LD1 of the Herefordshire Local Plan – Core Strategy and Policies KNDP1 and
KNDP4 of the Kingsland Neighbourhood Development Plan. The proposal is also contrary to the relevant aims and objectives of the National Planning Policy Framework.

3) The site lies within close proximity of the Kingsland Conservation Area and a number of listed buildings. The proposed residential development, by virtue of its siting and number of dwellings is considered to introduce a suburban layout and form in a rural location and would not allow a transition from open countryside to the centre of the historic village. As such, it is considered the development would result in less than substantial
harm to the significance of the setting of the Kingsland Conservation Area. As such, the proposals are contrary to Policy LD4 of the Herefordshire Local Plan – Core Strategy, Policies KNDP1, KNDP5 and KNDP6 of the Kingsland Neighbourhood Development Plan and Paragraph 196 of the Framework. It is not considered there are any public benefits which would outweigh the ‘less than substantial harm identified and hence there is no clear and convincing justification to warrant the applications approval.

4) The application site lies within the River Lugg sub-catchment of the River Wye Special Area of Conservation (SAC) and the nature of the proposal triggers the requirement for a Habitat Regulations Assessment to be undertaken. Under the Regulations there is a requirement to establish with certainty, and beyond all reasonable scientific doubt, that there will not be any adverse effect on the integrity of the River Wye SAC. The River Lugg sub-catchment suffers from the effects of point source and diffuse water pollution and phosphate levels in the river have already exceeded conservation objectives. The proposal in this case would generate additional foul water and phosphates which would be communicated to the mains sewer network for Kingsland. The discharge of treated water from the treatment works will contain residual phosphates which means there is a pathway for impact upon water quality in the River Lugg. As such, the Local Planning Authority is unable to conclude that the development would not have an adverse effect on the integrity of the River Lugg/River Wye SAC and the proposal has subsequently failed the required Appropriate Assessment. The proposal is subsequently contrary to The Conservation of Species and Habitats Regulations 2017; Policies LD2 and SD4 of
the Herefordshire Local Plan Core Strategy, Policy KNDP9 of the Kingsland
Neighbourhood Development Plan; the Natural Environment and Rural Communities (NERC) Act 2006 and the guidance set out at paragraphs 174 to 177 of the National Planning Policy Framework.

5) The application for 19 residential dwellings would require the provision of affordable housing (40%) and other planning obligations. On the basis of the current proposals, the scheme does not provide 40% affordable housing units. The application is also not accompanied by a completed Section 106 agreement which is necessary to secure the required provisions and make the development acceptable. It is therefore contrary to Policies H1, SC1, IDI, OS1 and OS2 of the Herefordshire Local Plan Core Strategy, Policies KNDP12 and KNDP13 of the Kingsland Neighbourhood Development Plan and the Council’s Supplementary Planning Document on Planning Obligations.

6) The application is not accompanied by key assessments and information required in order to sufficiently assess the transport impacts of the proposal on the local highway network and the acceptability of the site for the residential scheme proposed from a highway perspective. As such, it has not been demonstrated the proposal would meet Policy MT1 of the Herefordshire Local Plan – Core Strategy and Policy KNDP8 of the
Kingsland Neighbourhood Development Plan, together with the aims and objectives of the National Planning Policy Framework.