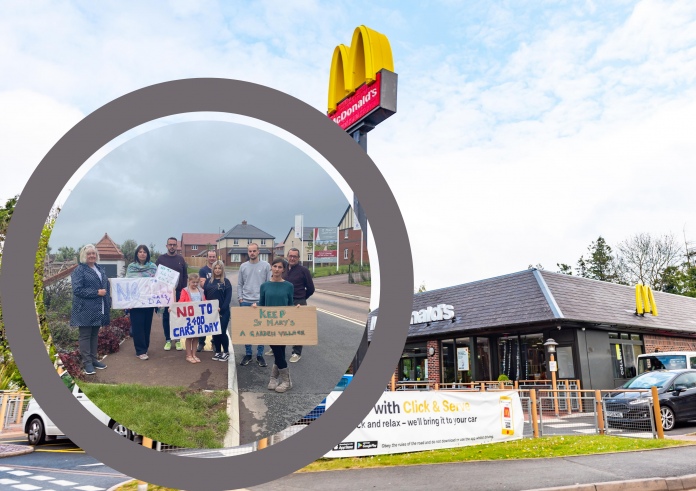 Residents from a new estate in Ross-on-Wye have shared their concerns that a new McDonald’s drive-thru restaurant in the town could cause an increase in litter, congestion and make their local park a no-go area at night.

Residents of St Mary’s Garden Village say that they believe that those in support of the planning application submitted by McDonald’s don’t realise that the entrance to the proposed drive-thru restaurant would in fact be via the new housing estate, rather than the A40, meaning that there would be a significant increase in traffic and noise in what was meant to be a quiet garden village when these people purchased their homes.

Residents say that if the outlet gets the go-ahead, that part of the entrance wall to the garden village would have to be demolished, leaving a less than desirable entrance to what should be a beautifully maintained area.

All of the residents that Your Herefordshire spoke to said that they wouldn’t have moved into their new homes if they knew that a McDonald’s Drive-Thru was set to be built right next to their homes.

“This McDonald’s proposal ought to be put in another location, in fact most people assume it is proposed to be built alongside the petrol station, Burger King and Starbucks off the dual carriageway; sadly this is not the case.

“Congestion on the bypass and roundabouts will lead to greater congestion in Ross on Wye town centre as people avoid the bypass for not wanting to get stuck in McDonald’s traffic.

“Living next to such an establishment would actually drive us around the bend. I picture something like this affecting our mental health as well as physical well-being in the absence of adequate rest, sleep and enjoyment of our home.

“We worry about noise levels mostly, then light pollution at night from all the lit up signage. Loss of privacy. Anti social behaviour on our doorstep (as was the case in Hereford at the Belmont McDonald’s and surrounding area).

“I have 2 children, my son isn’t quite 4 yet and my daughter is 2. My partner wakes up at 2.30/3am 5-6 days a week to drive large vans and small lorries. He needs to sleep obviously and we’re extremely concerned that won’t be possible for him, our 2 children and myself if we ended up with a 24 hour McDonald’s metre’s away from our home.

“The proximity of this 24/7 drive thru is just ridiculous. I cannot wrap my head around this and it seems very strange and uncommon to randomly plonk a McDonalds right on a residential estate. This seems very unreasonable, illogical and frankly ludicrous!”

Residents have until tomorrow (16th September) to make comments on the application, with close to 100 people already noted as objecting the proposals at present.