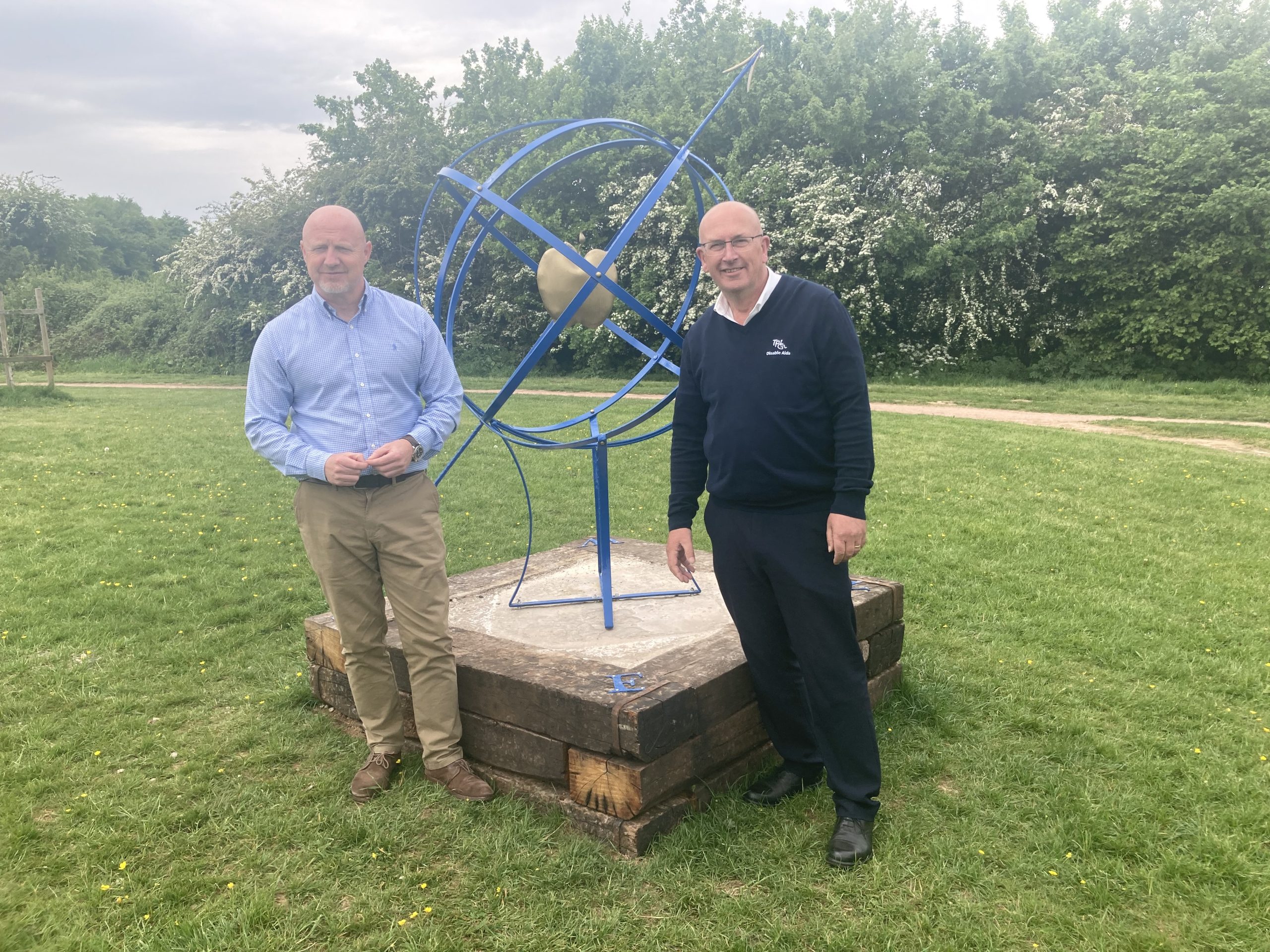 Local insurance advisers, Partners&, with offices at The Cider Barn on Huntington Lane, have been the major benefactor in the commissioning of a piece of field art recently installed in Aylestone Park.

The metal sculpture, known as an Armillary Sphere, is based on an original ancient Greek design. The Greeks thought it demonstrated how the sun and stars moved around the earth. It is also known as a Shadow Clock as you can tell the time by the shadow of the arrow. It has been designed on a local theme and built using local materials, colours and features.

The piece was commissioned by the Aylestone Park Association and funded by Partners&, with other local firms helping towards the construction of the plinth it sits on.

Aylestone Park was protected for future generations by a group of volunteers in 2012. They successfully lobbied to have the park listed as a Queen Elizabeth Field in Trust, meaning it is protected in perpetuity and can never be developed. The 47 acres site receives no Government funding and is maintained by a group of eight regular volunteers.

Chairman of the association Alastair Gibbs said: “The Aylestone Park Association is very grateful to Partners&, and other local firms, for the creation and installation of this beautiful Armillary Sphere, a lasting legacy for all who visit the park. The park is a sanctuary for many, from providing a place of solace and freedom during the lockdowns over the past two years, to providing a daily destination to the many dog walkers and families who enjoy it all year round. The volunteers and I work hard to keep the park looking nice for the public and we are very proud to have our very first piece of field art installed. We encourage everyone to come to the park to have a look, see if they can tell what time it is, and maybe share a photo of it on our Facebook page.”

The piece was made by local blacksmiths at Hereford Make CIC, who also collaborated with student blacksmiths from Herefordshire and Ludlow College to come up with the design.

Guy Milton, lead designer from Hereford Make CIC said: “Working with students from the college we wanted the design to really represent Herefordshire, hence the apple at the very centre. Normally the earth sits in the centre of an Armillary Sphere but, as the apple represents a key industry here in Herefordshire, it was fitting to put it at the centre of our design.”

He continued: “When building the piece Stan Lawler, our lead manufacturer and installer, used steel from local providers and incorporated scrap metal from our forge. We chose to paint it blue and gold, colours commonly used locally as they are the colours of the ancient shield of Hereford Cathedral. These colours have been used since the inception of the cathedral which dates back to Norman times, circa 1110. The symbolism of the colours is probably that the blue represents the river and the gold the crops in the fields.”

On the design and build process Milton said: “We actually started the design of the Sphere back in 2021 but Covid caused delays; we started the build in January of this year and we were delighted to see it go to its new home last week. We are really proud of the way it turned out and hope visitors to the park will enjoy trying to tell the time using their shadow and appreciating its truly local design and creation.”

Andy Williams, client partner at insurance advisory business Partners& said: “We are over the moon at how well the piece has turned out. I have known Alastair Gibbs for many years and have long admired the work he and the volunteers do in the park. When I approached him about Partners& sponsoring a tree in the park, he suggested a piece of field art instead. Many months later, after some brilliant design work by the students at the Herefordshire and Ludlow College and everyone at Hereford Make CIC, it has finally come to fruition. The team and I at Partners& are primarily business insurance advisers so with the apple sitting at the core of the structure, to represent one of the area’s ancient industries, it is very fitting that it should be at the centre of our gift to the park. We hope it gives everyone who visits great pleasure, and we look forward to visiting it regularly over the years to come.”