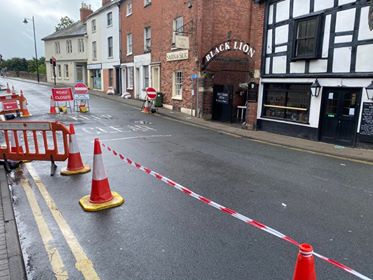 Herefordshire Council will discuss its controversial traffic measures on Tuesday when full council meets. The decision by seven cabinet councillors to go ahead with the initiatives aimed at creating a safer city, for pedestrians and cyclists, have received a huge backlash due to the impact on businesses and the likelihood of increased congestion in the city due to reduced lanes and the Old Bridge Closure.

Title of report: Motions on notice

Report by: Solicitor to the Council

Key decision
This is not an executive decision.

Purpose
To consider a notice of motion concerning an urgent matter.

Recommendation
THAT: the motion below is debated and determined by Council.

Motion
(Proposed by Councillor Jim Kenyon, Seconded by Councillor Jonathan Lester)
We ask that the temporary infrastructure measures brought in across the county to encourage
cycling and walking be debated at the full Council meeting on 4 August 2020 and in light of the
debate the executive is asked to reconsider its decision to implement the temporary measures.

Reason for urgency
As the changes to the road network may have an adverse effect on the day to day activities of
businesses and residents it is important that this matter is debated at the next council meeting.

NEWS | Paramedics stabbed on duty thank colleagues who saved them

NEWS | Paramedics stabbed on duty thank colleagues who saved them

31/07/2020
Two paramedics, who were stabbed while attending a patient in Wolverhampton earlier this month have praised the colleagues who came to their...

CHARITY | Bank your clothes at Leominster Fire Station and help...

NEWS | Fire crews called to fire at children’s playground in...

NEWS | Council to discuss traffic measures on Tuesday after major...