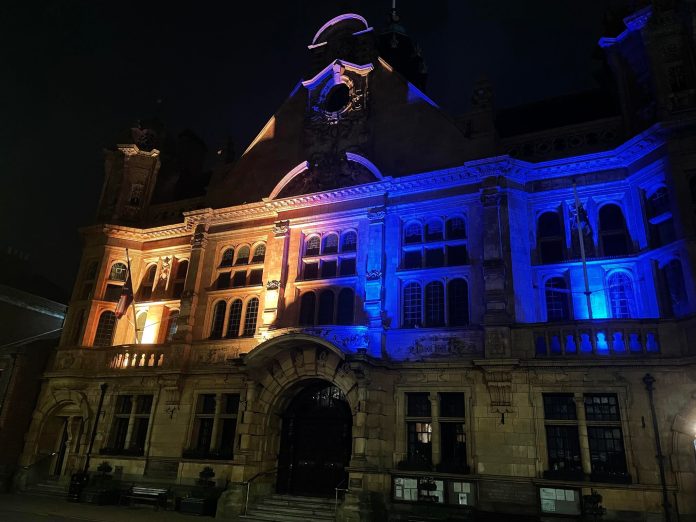 The community of Herefordshire is continuing to do what it does best, by coming together to help support the people of Ukraine.

Yesterday evening, Hereford Town Hall was lit up yellow and blue, in a move to highlight the ever increasing support for Ukrainians.

Mayor of Hereford, Cllr Paul Stevens, provides a message below on the current state of affairs in Ukraine;

“As Mayor I thought I would never see a war in Europe.

“The images of fellow Europeans fleeing their homeland to safety in Poland, Hungary and Romania is truly shocking.

“I spoke to a friend yesterday who had been on holiday to Kyiv over recent years, and he was saddened to see the streets empty over the weekend as the residents sheltered from attacks.

“I fully endorse and agree with the comments of Cllr David Hitchiner Leader of Herefordshire Council which he made at Cabinet last Friday.

“In a small symbol of solidarity the front of the Town Hall will be lit up in Yellow and Blue from this evening (2nd March).

“If you can please donate to the various aid groups that are popping up across the City and County,  often set up by Ukrainians who have chosen to make our City and County their home.”

Elsewhere, St Mary’s Church in Ross-on-Wye was also lit up in solidarity with the people of Ukraine. William Henderson captured the following fantastic image.

On Monday, a protest took place outside Hereford Shire Hall, with close to 100 people braving the wet weather to stand and show their support for Ukraine.

Many local businesses have also stepped forward to help, including Franks Luxury Biscuits who have sent a pallet of biscuits over to Ukraine to help feed those remaining in the country. Dunelm in Hereford have also been busy collecting essential items that can be sent over to Ukraine and surrounding countries.

A number of Facebook groups have been set up for people to combine their efforts.