On Wednesday 14 August, a Closure Order was granted at Hereford Magistrates Court under the Disorder and Nuisance criteria, of the Crime and Anti-Social Behaviour Act 2014. The application was submitted by the new Problem Solving Hub within West Mercia Police, with support from West Mercia Housing and local residents.

The application related to a house in the College Estate in Hereford and was a result of the vulnerable occupant being involved in issues of disorder and Anti-Social Behaviour (ASB).

The Closure Order was served to protect the tenant from continuing to be the victim of exploitation as well as provide neighbours with respite from continued ASB.

The order prevents any person from entering the premises except the tenant and extended family, housing officers, medical/ care professionals and emergency services for three months until 14 November 2019. It also gives Police officers the power to arrest any person in breach of the order.

Sergeant Duncan Reynolds said: “The Problem Solving Hub in West Mercia Police addressed the ASB issues surrounding the house in the College Estate by placing a Closure Order on the premises.

“We worked with the regulatory bodies to modify the order so that the house is closed to the general public but allows access to the owner and extended family as well as professionals that may need access.

“The tenant has been supportive of the order and we are hopeful that this will safeguard them from potential criminality and exploitation.

“Alongside this we have also worked with Home Office Immigration Enforcement to deport three individuals over the course of the last two years who have been involved in disorder and ASB at the address.”

He continued: “By utilising a problem solving approach, and working with partners we hope to have made the area a safer and better place to live.” 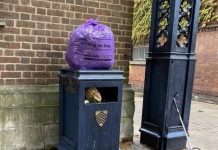 POLL | Should it become mandatory to wear face coverings in shops?