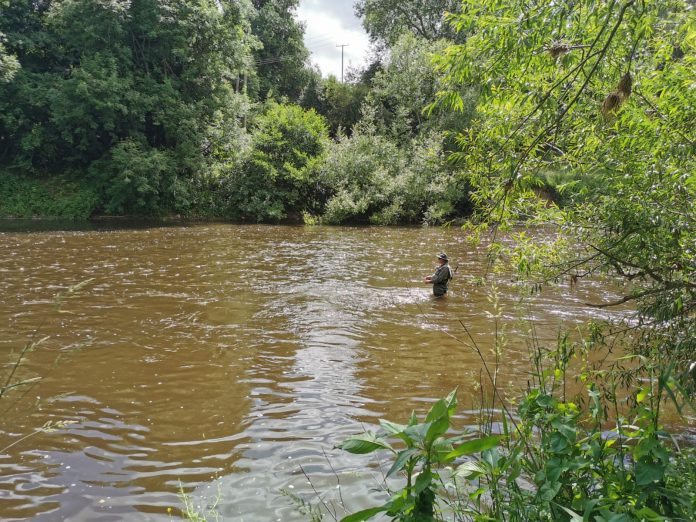 The River Wye is said to be Britain’s ‘favourite’ river and was the starting place for tourism in the 18th Century.

However, earlier this summer its beauty and ecology came under increasing threat from pollution. Most serious was the huge increases in phosphates draining into the streams and rivers of the Wye catchment, most of which were believed to be due to over-intensive chicken farming practices.

These phosphates stimulated the growth of algae, which as water temperatures increased and river flow decreased, removed oxygen to low enough levels to kill fish and other aquatic life.

In the last ten years the problem has been worse in the Lugg Valley where phosphates have drained into the Wye below Hereford. In response, concerted conservation and land management efforts managed to reduce phosphate pollution levels by 31%.

However, recent changes in farming in Wales, especially on the Upper Wye tributaries of the Ithon and the Lynfi above Builth Wells have seen increasing numbers of farms diversifying into free range poultry production.

While this is good for humans diet and animal welfare, the unrestrained draining of chicken excrement from riverside fields produced unacceptably high levels of algal bloom higher up the river than ever before.

It does seem that at last, the Welsh Government are beginning to act against these chicken farmers, by halting the permission of polluting chicken sheds; although it is unknown whether these efforts will be maintained.

The algae can multiply many times as they move through the slower flowing parts of the river. This in turn has meant that visibility in the water downstream sometimes dropped to less than 15cm and appeared a greenish colour.

However this was not the worst effect. Fish became infested with parasitic worms that burrowed into their flesh and eventually killed them. Closer to home, human health was also at risk since swimming and potentially ingesting the toxic algae can severely irritate the skin or cause intestinal problems. If pressure is not kept on these farmers higher up the river, our beautiful Wye is sure to suffer again, especially in the hotter weather that is soon to come.

Content put together by our guest writer Anna Ray.