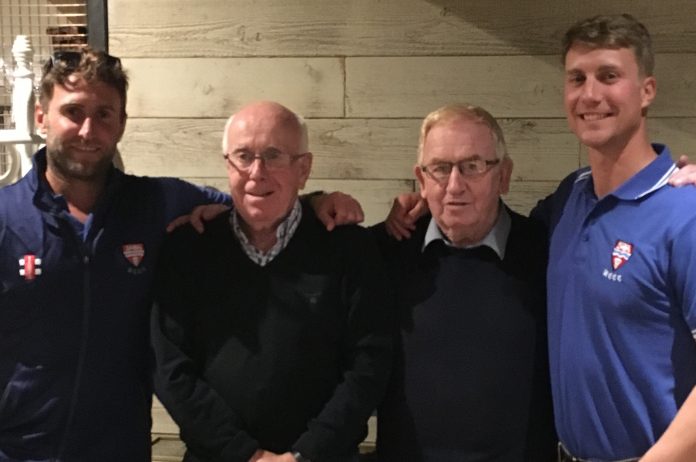 The former HCCC Secretary and Match Manager, Ken Sharpe, sadly passed away in early July having suffered ill health for the last year or so. Ken was a proud Welshman, born in Swansea, where he developed his love of sport, cricket in particular, at Dynevor Grammar School, an establishment with such diverse alumini as Spencer Davis, Harry Secombe and the former Archbishop of Canterbury, Rowan Williams.

On leaving school Ken joined Barclays Bank, working in insurance broking, a career that took him out of Wales to Maidstone, Shrewsbury and Oxford before retiring to Hereford. In all these locations Ken helped out with junior coaching including Herefordshire age-group sides and the juniors of Hereford City Sports Club.

On joining the County Club Committee Ken became secretary upon the loss of the stalwart Peter Sykes. He soon developed a reputation for ensuring the minutes of meetings were properly recorded! Sloppiness and inaccuracies were not his thing! He attended the scheduled Minor Counties meetings at Lord’s and soon questioned why such expensive ‘jollys’ were being held in London when a cheaper more central location would seem more appropriate. He was never afraid to make his point! With the retirement of Derek Hince, Ken also took on the added position of Match Manager where he soon became a firm friend of the players. I guess we all have our idiosyncrasies and his was driving. Always starting his car in second gear, whatever the incline, the resultant heavy clutch slipping and kangaroo take- offs entertained players in numerous hotel car parks. Having travelled with him to matches I can also verify his penchant for getting lost. He eschewed the use of satellite navigation, preferring to make his own mistakes, which he regularly did! A trip to Devon which started with a ten mile detour to Ross as the result of a wrong turning as close to home as Symonds Yat probably summed it up! As he would regularly say, HAPPY DAYS! He absolutely loved his time with the county, none more so than when HCCC won the Minor Counties KO Cup in 2016. That certainly was a ‘Happy Day’!

Ken, by his own admission, was never a very good player but he loved cricket, regularly starting his day with a coffee and The Telegraph sports pages. He remained a Glamorgan member, attending first class matches with ‘The Balconiers’ at the annual St.Helens festival and fund raising dinners in the off-season. He was also an important member of the Hereford Cricket Society, often travelling to other societies to assess the suitability (and affordability!) of a guest speaker for the Hereford meetings. Upon leaving his position with HCCC Ken spent more time playing golf at Burghill Valley where he became Fixture Secretary for the Seniors. He also started more frequently watching one of his other loves, Swansea City FC, and their attempts to return to the Premiership. Sadly, they didn’t make it this year.

Ken was a good friend who loved his sport and made a contribution at different levels wherever he lived. Would there were more like him.

RIP, Ken. We dedicate the recent Showcase game against WCCC to your memory and know you would have loved to have been there.