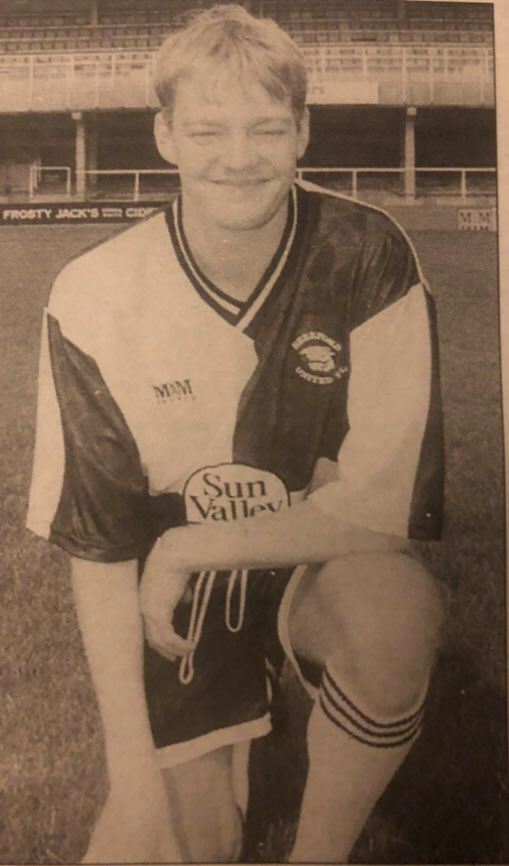 Matt Healey continues the series with a former Hereford player who is now a reverend.

Richard Leadbeater was born in Dudley on the 21st October 1977. He started out as a YTS player at Wolverhampton Wanderers and made one league appearance for club. He would then join Hereford United, who were looking for some divine inspiration to partner Neil Grayson up front.

The initial deal was a one month loan in December 1997. Hereford were playing in the GM Vauxhall Conference at the time.

I asked Leadbeater what his first impressions of Edgar Street were “The big difference was the result matter enormously, in reserve team football it was all about development. When I joined Hereford results meant everything, the Conference was a lot more physical than reserve team football, but when I joined Hereford I realised everything mattered a lot more in regards to getting the result”

Leadbeater continued “Then on New Years Day at Aggborough for the return game I scored a first half hat trick and set up Tony Agana for the other goal in a 4-1 away win, Adie Smith who was marking me won man of the match which was a bizarre choice”

Leadbeater would renew his loan until the end of March 1998 and scored a total of 7 goals in 15 appearances. His goals alerted a lot of clubs and it wasn’t straightforward that he would sign for Hereford United at the start of the 1998/1999 season.

“My contract wasn’t renewed at Wolves and for about 2-3 months I spent the close season trying to sign for a Football League club. I nearly signed for Swansea City , but that fell through, then I had a trial at Plymouth Argyle, but again that didn’t materialize. I found it quite stressful as nothing came off, I went back to Hereford as I knew the manager and players so we agreed a deal. When I left Wolves in my naivety and arrogance I was hoping to stay in the Football League. It was easy in some respects to go back to Hereford, but difficult for me in others as I had dropped down three leagues”

Hereford had trialed a number of strikers including the ex QPR forward Dennis Bailey and Robert Murray from Bournemouth, but Leadbeater would join midway through the pre-season campaign.

Leadbeater struggled for goals during the 1998/1999 season and I asked him if the lack of pre-season preparation affected him “Possibly, having a good pre-season is always helpful, but it was certainly the case that my goal return wasn’t as good, So I think it made a difference”

Leadbeater was part of the team that lost 3-2 at home to Newport IOW in the 3rd qualifying round of the FA Cup. Hereford were in terrible state financially which the below documentary highlights superbly.

I asked Leadbeater what he recalled from that game “It was horrific, that was a huge low point, it’s bad to lose any game, but we knew the financial implications to the club as a cup run would have been fantastic for us, as players were knew the difficulties the club faced financially and we all felt responsible”

Like most former players of that era Leadbeater has great respect for Graham Turner who as well as being manager of the club, he had taken over as owner from the previous Chairman Peter Hill “I remember him being a super man, we were aware of what was going on financially, but he was a brilliant chap and he was doing about 5-6 roles at the club”

Leadbeater would leave Hereford in February 1999 as the club were stick in mid table and had no chance of joining the promised land of the Football League. A Hereford Journal article at the time stated he was being collared by a lot of clubs, so with Hereford still being in a precarious financial position. when fellow Conference side Stevenage dangled a fee of £20,000. Graham Turner was forced to accept the money.

This was good business considering he had arrived on a free transfer only six months earlier. Moves to Hednesford Town, Nuneaton, Redditch and Halesowen followed for Leadbeater, but he would then retire from the game aged just 26.

I asked Leadbeater how the transition to being a man of the cloth started “It was a long process, I become a Christian at 16, the older I got, the more I wanted to work full time in the church. I began a process of dropping down the leagues and whilst doing that I took some studies and explored different avenues, it was a 5-6 year period where I slowed down one career and started another one, I was ordained in the Church of England and moved to Guildford in 2014 where I’m based at the King’s Church”

I asked Leadbeater if his congregation know about his Football past “Its a former life and was a long time ago. I loved doing being a footballer, but it doesn’t play a part in my life now”

Leadbeater though does bring his past into his current “I like to think my sermons are like being in a football changing room. I feel like I’m rallying the troops. I try not to mention to people about my football past, as it can come across as arrogant and it was a long time ago”