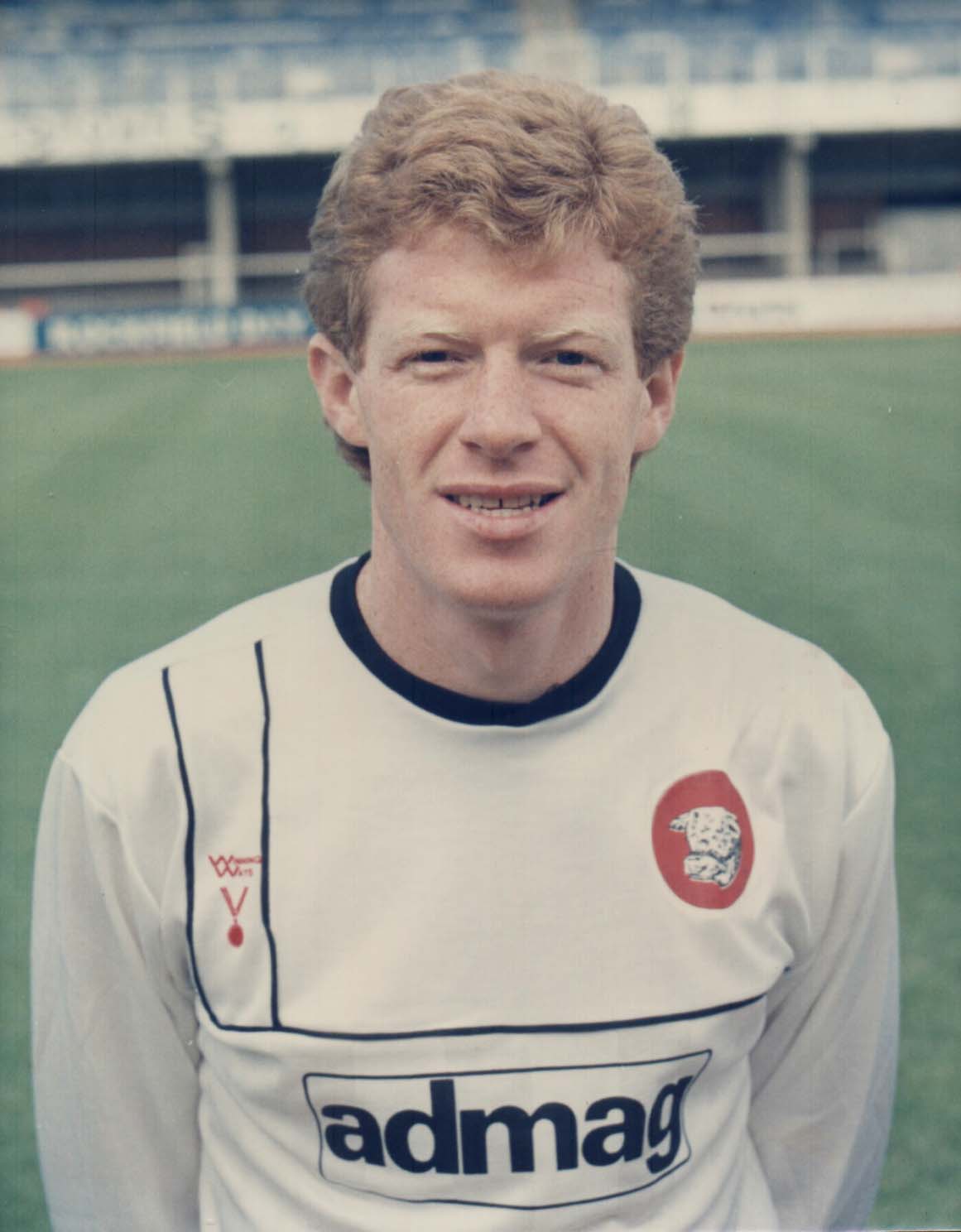 Ollie Kearns was born in Banbury on the 12th June 1956, his professional career started at Reading, then moves to Oxford United and Walsall followed. He joined Hereford United in 1983.

John Newman had just taken over as Hereford manager. I asked Ollie how John sold the club to him “He called me and asked if we could meet up. We met in a hotel in Birmingham with his assistant Alan Ashman. They said they wanted to sign me and were keen to bring in an experienced player alongside Stewart Phillips. they showed lots of enthusiasm and that made me want to sign for the club”

Kearns scored on his home debut against Chester City in a 2-1 win on the 7th September 1983. Alongside Stewart Phillips they were a prolific striking partnership “We played together for a number of years, we clicked, he had pace and I was stronger in the air. We scored a lot of goals together”

In the 1984/1985 season Hereford would reach the 3rd round of the FA Cup and faced Division One Arsenal at Edgar Street. The original game ended in a 1-1 draw on the 5th January 1985.

“Those games were great. I’ve watched both matches on youtube with my son. The pitch was rock hard, but the quality of football from both teams was superb. I loved it, arguably we should have won at home”

“It didn’t work out in the replay when we lost 7-2, but was a great experience playing at Highbury. We had a chance at the start but it was a tough shout to get anything from that game” Kearns scored Hereford’s first goal that evening in London, but by then they were 4-0 down.

Hereford were top of the old Division Four in March 1985 but sadly fell away and ended up 5th. Back then there were no Play Offs so they missed out on promotion by one place.

This was the best Hereford United team in a while, after struggling under the leadership of Frank Lord and finishing rock bottom of Division Four during the 1982/1983 season. The new manager John Newman had built a decent side “Jimmy Harvey was a class act in midfield he was the engine, every time he got the ball you thought something would happen, he had great skill, but it was a great team, we had Rosey (Kevin Rose) in goal. Pricey (Chris Price) at full back. Pej (Mel Pejic) and Hicksy (Keith Hicks) in defence. Jimmy had great vision and was also one of the best penalty takers I have ever seen”

Kearns also had a reputation of “Being a bit careful with his money” A lot of the player profiles at the time talk of getting Kearns to buy a round of drinks, or part with cash would be a shock. Plus, its safe to say unlike most footballers he was an avid reader of the Financial Times newspaper.

Keith Hicks told me “Thursdays he used to disappear to collect the rent from his properties in Banbury, he was tight with the pennies, but we loved him to death. I can remember a reunion we had and he offered to get a round in, me and Mel Pejic nearly fainted , him and Stewart Phillips were a brilliant partnership up front for us”

Kearns explains his entrepreneurial spirit “When I signed for Reading that was the day I started to think about what I would do when I finished playing. I was always interested in business. I then started building up a portfolio of properties and had another business which I sold on. It was always in my mind that when I finished playing I wanted to be in a strong position financially. I had a young family and because of that things are working nicely for me now”

When you read the stories of ex professional players struggling financially it’s great to see that Kearns looked after his cash, as the old saying goes you are a long time retired.

Hereford would finish the 1985/1986 in a mid table position, they suffered heartbreak in the Freight Rover Trophy area final lat the end of the season losing 3-2 on aggregate to Bristol City. The Bulls would miss out on a lucrative Wembley pay day.

Hereford had spent the early 1980’s applying for re-election a couple of times but John Newman’s management was a breath of fresh air “I really enjoyed playing for John, I had a huge respect for him, arguably once John left you could see a slow decline of the club”

John Newman would leave the club in September 1987 by mutual consent. Ian Bowyer would take over as player manager “The less I speak about Ian Bowyer the better, we didn’t really see eye to eye. He had great knowledge of the game, but the less said the better…”

After scoring 79 goals in 219 appearances Kearns would leave Hereford in late 1987 and join Division Four rivals Wrexham. He would return to Edgar Street and haunt his old club by scoring both goals for the Welsh club on the 13th February 1988 in a 2-0 win “If you leave a club and you were really happy and then things change it becomes quite sad. I felt really uncomfortable with the way Ian Bowyer was doing things, as before that with John Newman we were doing quite well. Me and Bowyer didn’t see eye to eye so I felt I had to leave”

Kearns retired from the professional game in 1990 and later played non league including spells with Kettering Town and Worcester City, he also became the first player to score for the original Rushden & Diamonds in 1992 when he had a spell with the now extinct club.

Kearns is still involved in his property business and spends his time between the UK and Italy. He still looks out for the fortunes of Hereford FC and would have been a special guest at the club in April 2020 until Covid-19 struck and bought the season to a halt.