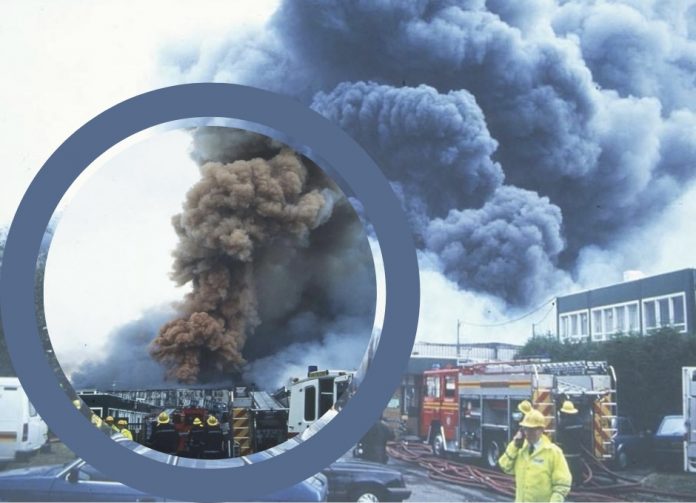 Firefighters John Davies from Leominster, 34, and David Morris from Hereford, 35, both died when they became trapped by a fallen ceiling at the factory. They will never be forgotten.

Photos from the the Hereford Fire and Rescue Service.

TWO firefighters who lost their lives in the Sun Valley fire in Hereford back in September 1993 have been honoured with a Fire Brigades Union Red Plaque at Queenswood Country Park and Arboretum.

Family members, and former colleagues who were there on the day that John Davies and David Morris made the ultimate sacrifice, attended the unveiling of the plaque along with crew from Hereford and Leominster fire stations, national FBU officials and senior HWFRS officers.

“David and John made the ultimate sacrifice while performing the duties that firefighters have to carry out every day,” said Chief Fire Officer Jon Pryce, who recalled that he had been a young firefighter at the time of the incident which provoked discussions with his family about the challenging nature of his chosen career.

“I cannot imagine what impact losing their loved ones has on those left behind,” he added.

The day’s proceedings had begun with Watch Commander Ady Morris, one of the event organisers, introducing national Fire Brigades Union official Tam McFarlane, who was on duty as a serving fighter in Taunton when the news of the tragic loss of the two Herefordshire colleagues had come through.

Mr McFarlane explained how the idea for the Red Plaques, which are funded by the FBU, was inspired by the Blue Plaque Scheme.

“The scheme remembers those who died in the service of their community,” he added.

Service chaplain, Rev Dick Johnson, who later concluded proceedings with the Firefighter’s Prayer, paid his own tribute including to the families who had had to continue their lives without their loved ones.

Retired firefighter Shane Jones, who served with John Davies and David Morris at the Sun Valley fire, added his recollections of the day, remembering how crews from Ewyas Harold and Eardisley, several of whom were present at Queenswood, battled bravely but in vain to save the duo’s lives.

“It was a very long day but I went home at the end of it,” he said. “Two of my friends and colleagues didn’t.”