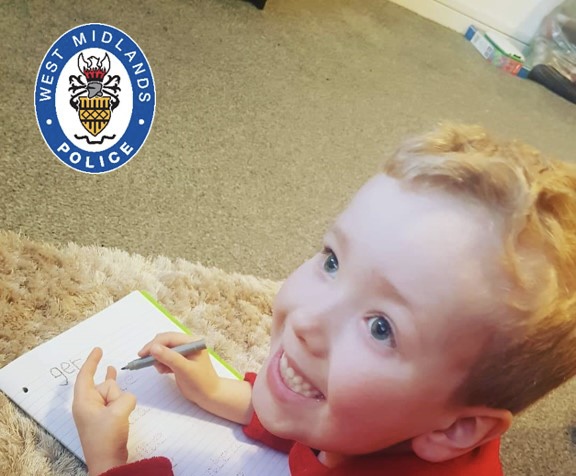 Step-mother Emma Tustin has today (Wednesday 2 December) been convicted of the murder of Arthur Labinjo-Hughes, who was just six years old when he died from a severe blow to his head.

His father Thomas Hughes has been convicted of his manslaughter.

Arthur’s death on 17 June last year, came after a campaign of cruelty inflicted by both Tustin and Hughes during which Arthur was forced to stand for hours on end and suffered repeated assaults.

On 16 June 2020, officers were called to Tustin’s home in Cranmore Road, Shirley, where Arthur was unconscious on the floor. Paramedics tended to him having arrived to find a neighbour performing CPR on the six-year-old.

Arthur had bruising to his head and body, appeared under-weight and his gums were bleeding. He was taken to hospital but sadly despite the best efforts of medical staff he died at 1am the following morning.

The accounts given by Hughes and his partner Tustin, differed but revolved around Arthur’s behaviour being poor and him banging his own head off the floor.

But due to the nature of Arthur’s injuries and the accounts given by Tustin and Hughes, they were arrested on suspicion of murder.

Police were able to painstakingly piece together what had happened with investigators trawling through hours of CCTV from inside the home in Cranmore Road.

Police also studied hundreds of videos, audio files and photos found on Tustin’s and Hughes’ mobile phones, and analysed thousands of messages they sent each other.

And the compelling evidence they revealed clearly illustrated the systematic cruelty inflicted on Arthur by both Tustin and Hughes.

West Midlands Police worked painstakingly with medical experts from various areas of clinical medicine and pathology to show that the six-year-old’s death had been caused by a head trauma inflicted on him by an adult.

And that the most likely way that happened was by him being vigorously shaken and his head banged repeatedly against a hard surface.

Senior Investigating Officer Detective Inspector Laura Harrison, said: “This has been a truly heartbreaking case and has deeply affected everyone who has been involved in it.

“An innocent boy was subjected to a campaign of cruelty by the very people who were meant to be loving and protecting him.

“Despite the lies they told, we carefully built a case against the two of them. We were able to seize their phones and found the messages they exchanged which showed their anger towards Arthur.

“As part of our investigations we were able to access their home where we found a CCTV camera set up in their living room. And the footage from that helped us build up a picture of the grim reality of Arthur’s life inside that house.”

The court was shown footage of Arthur spending hours at a time forcibly standing in isolation and he would be punished for unauthorised movement including attempts to sit down, to ease his discomfort.

And they heard many examples of audio recordings, where Arthur is being sworn at, insulted, and subjected to numerous threats of violence.

Sadly police found no evidence of a space in the house in Cranmore Road that Arthur could have called his own. Officers found his duvet shoved in a cupboard under the stairs, because he was made to sleep on the floor in the living room each night.

Tustin alone had more than 200 audio recordings of Arthur on her phone. In many he can be heard asking to go and see other members of his family. In others he can be heard begging for help; saying that he’s not being fed and he needs food and a drink.

After Arthur’s death a neighbour told police that she’d heard Tustin shouting ‘face the wall’. On another occasion Hughes told her that if she heard someone saying ‘don’t kill me’ she should ignore it, assuring her that he wasn’t hurting Arthur.

West Midlands Police took evidence from another witness who commented that when she’d seen Arthur in February he’d seemed healthy, but by June he appeared physically weak, struggling to stand and he had difficulty in climbing stairs.

Another described the child as ‘broken’.

Police also found a string of furious text messages between Tustin and Hughes on the day before Arthur was fatally injured. Then evidence of a short phone call, before another text from Hughes to Tustin’s saying: “Just end him”.

Det Insp Harrison said: “It’s not clear why Tustin and Hughes started to make Arthur’s place in his family home so truly awful and why they caused him such harm and suffering – but that harm and suffering was sustained and escalated over time.

“Nor is it clear why the couple installed a CCTV camera in their own living room, but sadly that footage has proved invaluable in demonstrating some of the hardships, emotional abuse and physical violence Arthur endured behind closed doors.”

On the day Arthur was fatally injured Hughes had left the house at just after 1pm, leaving his son alone with Tustin. So it is only she who will ever know exactly how Arthur suffered the blow that killed him.

But police used CCTV, as well as the calls and messages the couple exchanged, to provide the court with a compelling case that she had inflicted that injury and then failed to call an ambulance for 12 minutes.

Hughes then arrives back home, and the pair try to give Arthur a drink and some children’s paracetamol medicine, before 999 is finally called.

Det Insp Harrison said: “We believe that both Tustin and then Hughes, understood how seriously Arthur was injured. Only the pair of them can explain why it took so long for an ambulance to be called, but we’d suggest it was the final act of cruelty they inflicted on Arthur.”

Hospital tests revealed Arthur had abnormally high salt-levels and he was seen to have bruising in many areas uncommon for accidental bruising in a child.

A post mortem later revealed that Arthur had over 100 marks and bruises on his head, body and limbs including bruising of different ages.

A number of medical experts told the court that they did not believe the injuries Arthur had could have been self-inflicted; that a child of six simply could not have generated enough force to have caused the fatal injury to his own head.

A specialist kidney consultant, said that for Arthur to have had such high levels of salt in his system could only be explained by one of two situations.

Either Arthur had ingested at least six and half tablespoons of salt on the day he was fatally injured; and the expert couldn’t see how a child would have done this, other than if he was deliberately force-fed a mix of salt and water by an adult.

Or that Arthur had repeatedly been poisoned with heavily contaminated food and/or water over a longer period of time.

The couple also faced four charges of cruelty to a child.

On the opening day of the trial on 5 October Tustin pleaded guilty to one of those charges – wilfully ill-treating Arthur on multiple occasions by forced standing, isolation and intimidation.

In the final days of the trial Tustin admitted a second charge of child cruelty, namely assaulting Arthur on multiple occasions.

Today she was convicted of two further charges of cruelty by withholding food and drink and by administering salt.

Hughes was also convicted on two counts of cruelty, by forced standing, isolation and intimidation, and also by assaulting Arthur. Hughes was cleared of murder, cruelty by withholding food and drink and by administering salt.

They will both be sentenced tomorrow.