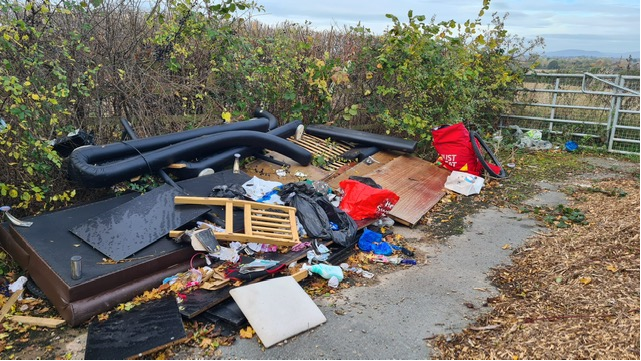 Herefordshire Council has won an enforcement case against two people found guilty of fly-tipping and failing in their duty of care when disposing of a van full of household waste.

Hereford magistrates heard how on 3 November 2021, officers of the council’s community protection team found wooden doors, chairs, a sofa, a bedframe and large amounts of general rubbish dumped in a gateway off Gatehouse Road, Rotherwas, Hereford. Officers searched the waste and found documentation relating to Buruiana and Stefarca. The court heard the pair had attempted to hire somebody to take the waste away. Because the quote was too expensive, they admitted to transporting it from their home address and dumping it in Rotherwas.

“We were alerted to this case through Facebook posts, as so many of our residents were shocked at how much waste had been tipped. In this case, the unusually large quantity of waste was tipped because the offenders had not got the necessary permit to take the rubbish to one of the council’s waste sites in a commercial vehicle. So, they simply u-turned from the waste site and fly-tipped it nearby.

“Fly-tipping costs council tax payers tens of thousands of pounds each year and anyone found will always be prosecuted. This case is a clear example of what will happen when the council traces the waste back to those responsible.”

The maximum penalty for fly-tipping is a £50,000 fine and/ or five years’ imprisonment.

The council’s community protection team will investigate unlawful waste disposal and fly-tipping cases reported via the council’s websiteor by calling 01432 261761.