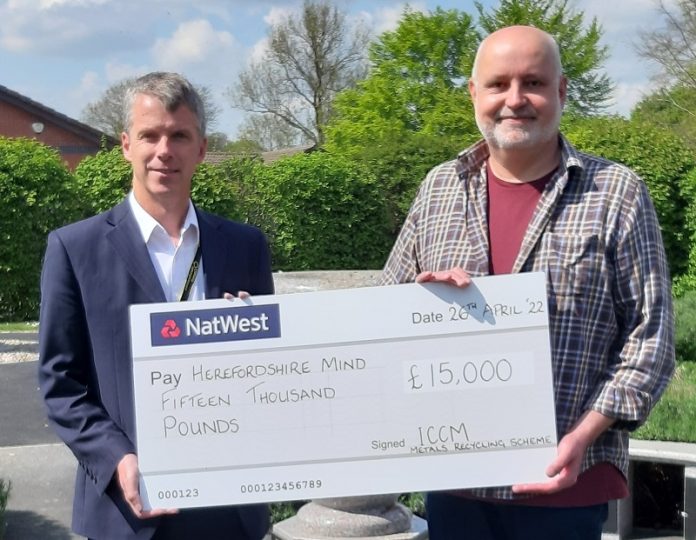 Herefordshire Mind has been presented with a cheque for £15,000 from Hereford Crematorium.

The crematorium has been part of a national metal recycling scheme since 2011, which has allowed it to donate over £120,000 (and counting) to local charities.

The Institute of Cemetery and Crematorium Management (ICCM) launched their metal recycling scheme in 2005 as a way to recycle the metal recovered from cremated remains instead of burying them. Participating crematoria are asked to nominate a local bereavement charity to be given a share of surplus monies from the recycling process each year.

The service is provided at no cost to crematoria who have signed up to the scheme and metals are not recycled without the next of kin’s permission, which is sought at the time of the funeral arrangements.

John Gibbon, Herefordshire Council Direct Services Manager, said: “Thanks to the ICCM’s metal recycling scheme, Hereford Crematorium has been able to generate over £120k for local charities, and it is fantastic that the scheme continues to provide funds for so many great causes. Mental health support is more important than ever, so it is a pleasure to present this cheque for £15,000 to Herefordshire Mind.

“None of this would be possible were it not for the incredible generosity of those who have made the decision to participate in the scheme, and ensure that their loved one’s last gesture is one of philanthropy and benevolence.”

David Harding, Development Manager at Herefordshire Mind, said: “On behalf of everyone at Herefordshire Mind, a massive thank you to the ICCM recycling programme, Herefordshire Council and Hereford Crematorium. Most importantly, heartfelt thanks to all of the families who have supported this scheme. We are humbled and incredibly grateful to you all. The funds will be used to continue our support of some of the most vulnerable members of communities across our wonderful county of Herefordshire.”

For more information about Herefordshire Mind, please visit their website.

The Council accepts nominations all year round, so if you would like to put your charity forward for consideration, please email Hereford Crematorium at bereavement@herefordshire.gov.uk or telephone 01432 383200.