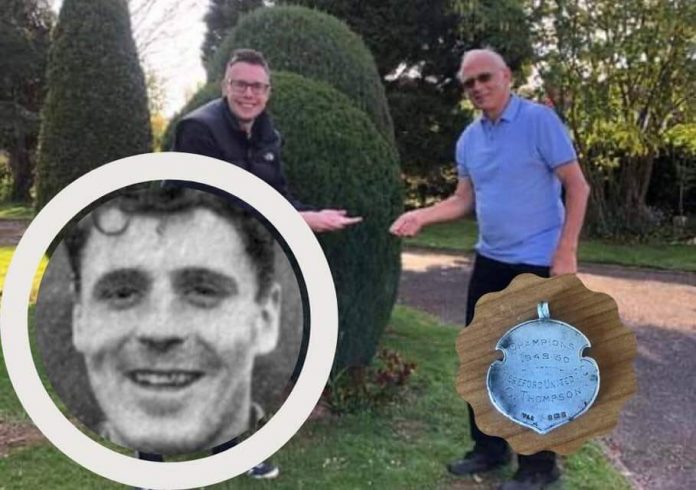 Charlie Thompson played for Hereford United from 1945-1957 and to many people was “Mr Hereford United”. He scored 180 goals for the club in 439 games, which included eight in one match. He was awarded a champions medal during the 1949/1950 season when Hereford reserves won the Birmingham league. It has a particular significance as it was the first competition the club had won.

Charlie previously played in the Football League for Sheffield United, but during the war guested for Hereford and Lovells Athletic. It was a great coup when Hereford obtained his signature permanently in 1947. After achieving a remarkable scoring record he had to retire in July 1955 due to an eye injury, but stayed at the club in various roles including trainer, coach, groundsman, pools organiser and taxi driver.

Charlie sadly passed away on the 1st August 1997.

The medal has now been reunited with Charlie’s family. Matt Healey picks up the story:

“I collect Hereford United memorabilia and Andrew Wood from Herefordshire Community Recycling Group got in touch and told me that during a house clearance he had some books and programmes of the football club and asked if I was interested in having them. I said I would and met him a few weeks ago. Included in the find was a medal named C Thompson.”

Matt continues, “Charlie Thompson was before my time, but I knew he scored a lot of goals for Hereford United, the medal was left on my desk for a few weeks and I decided to see if I could track down Charlie’s family.”

“I put out a post on the Hereford United Facebook group and Charlie’s daughter in law Margaret got in contact and we were able to arrange a day to meet up and I was able to reunite the medal with Charlie’s son Roger.

Roger told us, “I never knew the medal existed. It’s fantastic it’s been reunited with the family after all these years away, we will make sure its looked after.”

Thank you to Ron Parrott for the biography and archive photo of Charlie Thompson.