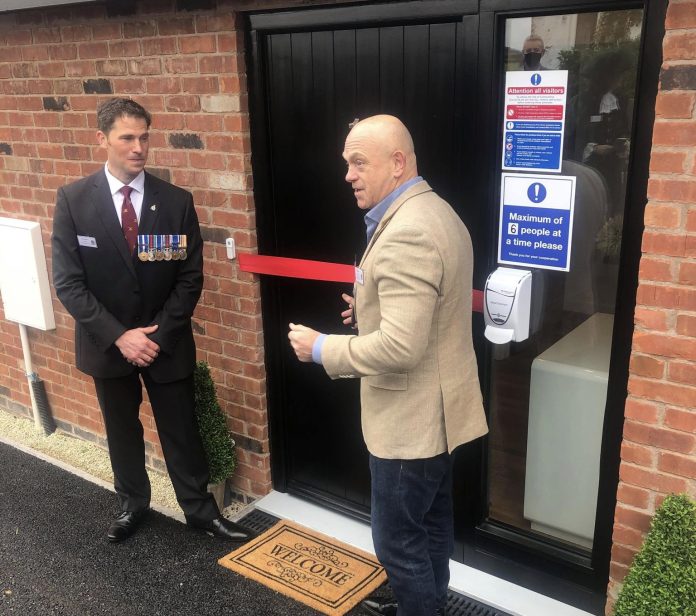 Set up in 1918 by Robert Buchanan in memory of his son Alan who died in World War I, the Buchanan Trust has been helping former service personnel readjust to civilian life for more than 100 years.

In 2018 the trust also became an almshouse provider, offering veterans and their families quality homes and the opportunity to gain skills and experience in the agricultural and construction sectors in rural Herefordshire.

Drew is no different. Since leaving the armed forces, the Trust has helped him to think about his next steps. He’s one of the first residents to move into the Trust’s new North Farm site, a redundant farmyard which has been transformed into four new homes with the help of a £152,000 grant from the Government’s Affordable Housing Programme.

Designed for people living with physical injuries or reduced mobility, the mixed size accessible bungalows are built around a courtyard with a communal meeting room, creating a sense of community and enabling veterans to support each other as they get used to civilian life.

The site will provide six homes in total, with further plans to convert a milking parlour, dairy, stables and hayloft into two, two bedroomed cottages, one with full disabled access.

As identified by charity Help for Heroes, former service personnel are particularly interested in working in the rural, farming and forestry sectors.

North Farm is designed to address this, forming part of the Buchanan Trust’s wider vision to create a national facility for former service men and women to live in a community where they can help each other to recover, learn, grow, and work.

For Drew, it’s chance to reflect and start to plan for the future: “I’m grateful for having the chance to rebuild my life since I have come to the Buchanan Trust.”

Back in May 2021, we attended an event where Ross Kemp opened four newly built veterans cottages in Herefordshire.

Ross Kemp told Your Herefordshire, “Its a stunning achievement to build this during a pandemic and two lockdowns. I have friends in the armed forces who have found it difficult to adapt civilian life. My personal point of view is if you have served your country you should have a roof over your head, You should have the best medical care,. It shouldn’t be a postcode lottery. The Buchanan Trust enables ex personnel to make that transition.”

Ross Kemp continued by saying, “Robert Buchanan set up the trust in 1918 and I wonder if looking down now he would be happy or sad that the need for the trust is still there after he founded it over 100 years. I’m proud that we have fantastic armed forces. I would like to thank Herefordshire County Council for all their help.”