The St Thomas Way – a new heritage tourism route from Swansea to Hereford, inspired by a real medieval pilgrimage – will launch with a day of exciting events at Hereford Cathedral on Saturday 7 July 2018.

This new heritage route invites visitors to follow in the footsteps of Welsh outlaw William Cragh and his fellow pilgrims, and to step into the rich and colourful history of the Welsh Marches (borders) – the wild west of medieval Britain.

In Swansea in 1290, William Cragh, was hanged by the local Norman Lord, William de Briouze. But, after the execution, Cragh came back to life, in what was understood by local people as a miracle of St Thomas of Hereford. Cragh travelled from Swansea to Hereford on pilgrimage – together with Lord William and his wife – to give thanks at the shrine of the saint.

Available online at www.thomasway.ac.uk from Saturday 7 July, the heritage route is based around 13 locations from Swansea to Hereford, each with interactive, multimedia digital content, as well as a self-contained circular walking route. There’s also the chance to solve an online puzzle and win a virtual badge for each location – in the tradition of the pilgrim badges collected by medieval pilgrims on their travels.

Professor Catherine Clarke of the University of Southampton, Project Director, said ‘The weird and wonderful story of Swansea’s hanged man is a brilliant way into the strange and fascinating world of the medieval March of Wales. Visitors and local communities will be able to discover some real hidden treasures and little-known stories on this beautiful heritage route.’

Canon Chris Pullin of Hereford Cathedral said: ‘Though less well known today, St Thomas of Hereford was an important saint in the Middle Ages and his shrine was a major pilgrimage destination. We hope this new route will encourage visitors to explore his story, and to experience the benefits of pilgrimage for wellbeing, recreation and renewal.’

The free launch day at Hereford Cathedral, on Saturday 7 July, is suitable for all of the family with activities ranging from medieval pilgrims living history, to story-telling and music, as well as a labyrinth for reflective walking. The St Thomas Way has even launched its own beer – a medieval-inspired pale ale, with a touch of yarrow (an ingredient used in medieval brewing), produced by Mumbles Brewery which will be available at the launch. Artist Michelle Rumney will also present an art exhibition, inspired by the Mappa Mundi, which opens on the day and runs throughout July. 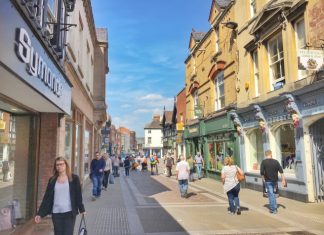 NEWS | Hereford now the 22nd most progressive city in the...

16/10/2020
Hereford has jumped 14 places on the 'Most Progressive Cities in the UK' list, above both Gloucester and Worcester and just behind...

Amy Pegler and Lissa Morgan to run marathon through Herefordshire to...

NEWS | Ross-on-Wye and District Branch of The Royal British Legion...

FEATURED | Raise money for The Royal National College for the...